"There clearly are threats out there." 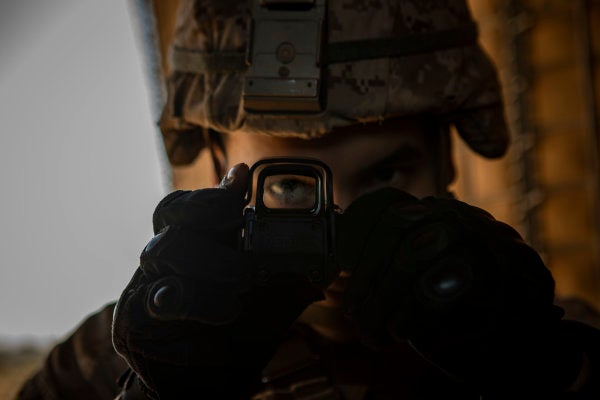 Thousands of
Marines carrying out crisis-response missions in the Middle East are getting a better look at what war with a potential adversary such as Russia might look like.

As the battlespace in the Middle East gets more complex — with Russia backing Syrian forces and Turkey, a NATO ally, fighting on the opposite side of the conflict from the U.S. — members of the
Marine Corps' ground-based crisis response force are encountering new threats while operating in the region.

For a service that has spent nearly two decades fighting insurgent groups, it's providing a real-world look at what they can expect if they face off against more advanced enemies with sophisticated equipment.

Members of Special Purpose Marine Air-Ground Task Force-Crisis Response-Central Command are operating across swaths of Syria, Iraq and Afghanistan. And some of the tactics and equipment they're encountering could shape the way U.S. forces train for future fights.

“We always learn things through operating, but … as we consider operating against near-peer and hybrid threats, there's a lot of commonality in the past,” Col. George Schreffler III, who commanded the task force from April to December, told reporters at the Pentagon this week.

Schreffler said Marines and other troops must think about physical camouflage and hiding their electronic footprints “when any adversary at you with their own small unmanned aerial systems or their aircraft.”

“We have to continue to train to minimize our signatures, both from an electromagnetic perspective and from a physical visual and audible observation perspective,” he said.

Citing operational security, Schreffler declined to provide examples of the threats his Marines encountered during their
deployment. But U.S. troops have shot down drones from pro-Assad groups that were flying near them, and American warplanes have encountered Russian jets above Syria.

With so many actors operating in the U.S. Central Command space and inaccurate information being spread, Schreffler said commanders are aware that things can escalate quickly.

“Quite frankly, something could've happened in CENTCOM during the course of our deployment that would've required high-end skills against a peer or near-peer adversary,” he said.

Now Schreffler and other Marines on that deployment are sharing what they saw with other U.S. and coalition leaders, so they know what to watch for. And the Marines, he added, are gaining valuable experience they can apply during future missions.

“There clearly are threats out there and, with our aircrews in particular, operating in Central Command is a significant opportunity to assess and deal with those threats and to fly in an environment … where they're gaining significant operational experience,” he said.