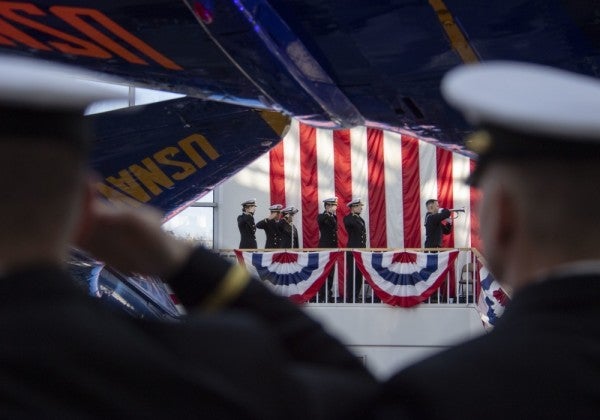 Marine Gunnery Sgt. Ryan Masel and Staff Sgt. Samuel Mullins weren't carrying any weapons when they heard gunfire inside a building on their Florida base last month. Still, they ran inside, planning to confront the shooter.

As they charged toward the sound of gunfire, the Marines pulled a fire extinguisher off the wall and prepared to fight. Navy Airman Ryan Blackwell was inside the building when the Dec. 6 attack at Naval Air Station Pensacola started. The gunman, a Saudi officer who was training at the base, shot him five times through an office window.

Despite his injuries, Blackwell jumped on top of another sailor to shield her from the gunfire. He then helped lead the other sailors to safety — all while continuing to take fire.

The troops' courageous acts were highlighted by U.S. Attorney General William Barr this week. In his press conference, Barr said the FBI determined the shooting, which killed three sailors and injured several others, was a terrorist attack.

“Ryan Blackwell's heroic acts saved countless lives that day, and we're grateful to the bravery of the base personnel and the local law enforcement responders who initially arrived at the scene and engage the shooter,” Barr said.

The Marines and sailor declined requests for interviews. Their commands, citing ongoing investigations, won't say whether their actions have led to nominations for heroism awards.

“No award information will be released for any service member or civilian prior to official announcement,” said Cmdr. James Stockman, a spokesman for Naval Education and Training Command.

Blackwell, who's from South Carolina, enlisted in the Navy in 2017. According to his service records, he has never deployed. He was in an office with two other sailors when the shooting began.

He told the Pensacola News Journal the day after the attack that the gunman didn't open the office door but shot at them through a window. All three troops were hurt, but Blackwell tied his belt around his arm as a tourniquet and helped usher his colleagues out.

Masel and Mullins never faced off against the shooter, but Barr said they helped “save many lives by giving CPR and other urgent medical aid to the victims.”

Both earned Combat Action Ribbons during those deployments.

The attack has led to a review of the military's international exchange program, which allows foreign troops to train on U.S. military bases. It has also reignited debate over whether service members should be allowed to carry firearms on base.

The 2015 terrorist attack in Chattanooga, Tennessee, another shooting rampage at a recruiting office and naval Reserve center, also prompted lawmakers and military leaders to assess whether troops should be permitted to carry firearms on bases.

Last month, the Marine Corps authorized about 3,200 law enforcement personnel to carry firearms on its installations — even if they're not on duty.

In the wake of the Pensacola shooting investigation, the U.S. booted 21 Saudi cadets from training programs after some were found to have anti-American or jihadi materials on their computers. Others were found to have child pornography materials, Barr said.