The family of a Muslim Marine recruit from Michigan who died in a fall at boot camp said Friday they don't believe... 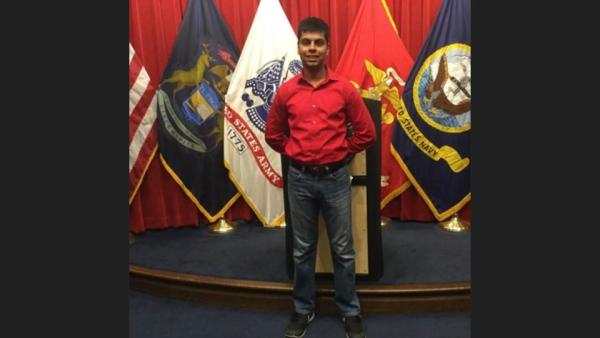 The family of a Muslim Marine recruit from Michigan who died in a fall at boot camp said Friday they don't believe the charges announced so far in their son's death are severe enough for the hazing and abuse he endured.

“The charges appear to be insufficient and do not address the magnitude of the torture, assault, abuse, hazing, neglect and maltreatment” to which Raheel Siddiqui, a 20-year-old former high school valedictorian from Taylor, was subjected, his family said through their lawyer, Shiraz Khan, Friday evening.

The statement came less than two hours after the Marine Corps' Training and Education Command (TECOM) in Quantico, Va., announced it would hold a preliminary hearing in North Carolina next Thursday to determine whether charges against a still-unnamed gunnery sergeant should go forward.

TECOM officials late Friday afternoon issued a release saying an Article 32 hearing had been scheduled related to the investigation into the death of Siddiqui last March in a three-story fall from a stairwell at the iconic training depot at Parris Island, S.C., 11 days into his boot camp.

A Marines spokesman would not say what specific role the gunnery sergeant may have had in the death, which an earlier investigation found occurred after the recruit was slapped by a drill instructor and forced to run back and forth repeatedly in a barracks and refused medical treatment for a sore throat.

But U.S. Sen. Gary Peters, D-Mich., told the Free Press this week that the Marines were preparing to hold an Article 32 hearing for the instructor most directly linked to the Siddiqui investigation, which also detailed reports of physical abuse and Siddiqui being called a “terrorist” by his drill instructor in the days before he fell from an exterior stairwell.

The charges include failure to obey a lawful general order; cruelty and maltreatment; making a false official statement; drunk and disorderly conduct and obstruction of justice. Missing from those charges, however, is a charge of assault, which the earlier investigation had recommended.

“The Siddiqui family does not believe that the charges that are being brought forth accurately justify an explanation of what happened to their son,” Khan said in a statement to the Free Press, noting that the earlier investigation also identified violations among leaders at the base as well that were not covered by the TECOM release. “It is unbelievably difficult to understand and justify how the charges to be brought convincingly align with the facts and evidence already in motion. We’ll stay close to the proceedings and will respond accordingly.”

The hearing is scheduled to be held at Camp Lejeune in North Carolina two days before the one-year observance of Siddiqui's death, which occurred at the Third Training Battalion barracks March 18.

The Free Press first reported about the potential hearing Wednesday, citing Peters, a member of the Senate Armed Services Committee.

The Marines did not confirm or deny the report at the time but said more information would be coming Friday. Officials at the Training and Education Command, which oversees the training facility at Parris Island, also said a second sergeant is to undergo an Article 32 hearing next Friday but it was not related specifically to the Siddiqui investigation but to an associated one, in which another Muslim Marine recruit was allegedly ordered into an industrial dryer and burned.

The two investigations are closely linked because officials concluded that Siddiqui's drill instructor should not have been working with his platoon because he was under investigation for the earlier incident involving the dryer. Because the Marines did not explain the charges, it was not known the role that either sergeant may have played in the earlier incident.

Peters said there is much about the incidents still to be uncovered.

“There are many unanswered questions about Raheel Siddiqui’s death and the events leading up to his death must be fully investigated so the Siddiqui family gets the answers they deserve,” Peters said Friday. “I am pleased the U.S. Marine Corps has handled this matter with the seriousness it deserves and is working to hold accountable those responsible for any abuse or mistreatment of Raheel Siddiqui and other Marine recruits at Parris Island.”

“Nothing we do can ever bring Private Siddiqui back but today we are one step closer to getting justice for his family,” said Dingell, who has been working to get answers from the Marines and have the cause of death changed from a suicide since the incident occurred. “While this is a preliminary hearing, it is an important step toward ensuring those responsible are held accountable.”

In the wake of Siddiqui's death, multiple investigations launched before and after resulted in reports last September detailing many instances of hazing and abuse on Parris Island.

The Marine Corps has removed at least four leaders, suspended some 20 or more personnel and instituted zero-tolerance policies for hazing or other infractions among drill instructors.

But legal action has been moving much more slowly, though the Corps on Friday also announced it would move ahead to a general court-martial on charges of cruelty and maltreatment and other violations against another drill instructor, Staff Sgt. Antonio Burke, who was accused of forcing recruits to undergo disallowed training, making them train in an abandoned building on base and failing to provide medical care in at least one instance. Three instructors under him were also recommended for court-martial.

The earlier investigation concluded that Siddiqui had committed suicide — a finding reached by a civilian coroner but rejected by his family— but that the actions of his drill instructor were a direct impetus to his death. It also found that Siddiqui had threatened suicide earlier in his training and was returned to his platoon when he recanted — but that a report he made of being physically abused at that time was not forwarded up the chain of command.