This article by Hope Hodge Seck originally appeared on Military.com, the premier source of information for the military and veteran community. HELMAND... 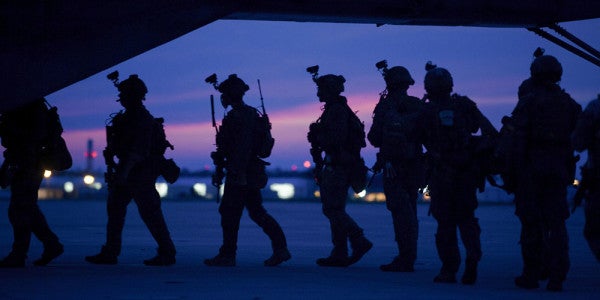 This article by Hope Hodge Seck originally appeared on Military.com, the premier source of information for the military and veteran community.

HELMAND PROVINCE, Afghanistan — A Taliban shadow governor who had planned and executed improvised explosive device attacks on Marines and Afghan soldiers for well over a decade was killed in a precision airstrike just days before Christmas, Marines here told Military.com.

Task Force Southwest, the 300-Marine element that deployed to Helmand province as an advisory force for the Afghan National Defense Forces in April, does most of its work from inside the wire, supporting the local troops who patrol and launch ground attacks. But this recent strike on local Taliban mastermind Qari Fida Mohammad illustrates the impact Marines continue to have on the active fight.

“Through the work of the intelligence sections as well as the operations in here, and coordination with the Afghans as well, we were able to conduct a strike on him a few days ago,” said Hubert, battle captain for Task Force Southwest. “Basically, we're very familiar with the battlespace now. So when we see the leaders we know are important there, we can kind of do a bead on them.”

The unit started tracking Mohammad with its eyes in the sky. When he was well positioned as a target, the Marines called in two Air Force F-16 Fighting Falcons to execute the strike.

“He was in a vehicle traveling with deputies, bodyguards, and a cousin of his, who was also a sub-commander,” Hubert said. “We took the shot successfully, and dead on the spot, which was huge.”

Mohammad, who was based in the Taliban hotbed of Marjah, but operated throughout Helmand province, had been well-known to the Marines for years.

Col. Matthew Reid, deputy commander of the task force, told Military.com he had known about Mohammad in 2010, when he deployed to Helmand for active combat operations.

“We're still not really fully aware of the exact ramifications of taking him out,” Reid said. “It was a pretty big takedown, so we're pretty happy about it. He was behind a lot of attacks against Marines back in the day — really high profile attacks.”

Hubert said the task force was now tracking the impact of Mohammad's elimination. Ahead of the strike, he said, Marines had watched via drone footage as local civilians took to their homes, fearful of being blamed and facing violent reprisal if any attack were launched on the shadow governor. Now, he said, newly leaderless Taliban fighters in southern Marjah are acting disorganized and confused, without orders to carry out.

“Supposedly, [Mohammad] also had a lot of intimidation where he killed full families; he was absolutely just a Mafia-style Taliban leader in that area,” Hubert said, adding that he regularly demanded 'taxes' from local civilians by force. “Taking him out … hopefully provides the residents of Marjah and the southern end a little bit of a 'hey, maybe it's a turn.'”

For the Marines, Marjah is a region full of history. It's the site of some of the service's most hard-fought battles in Helmand. Some 50 American troops died in the 2010 joint siege on Marjah, known as Operation Moshtarak. When Marines departed Afghanistan in 2014, Marjah was considered relatively stable; but by 2016 it had fallen back under Taliban control.

Marines are now working to empower Afghan troops from the local 215th Corps of the Afghan National Army to hold the line. When the small task force arrived, the provincial capital city of Lashkar Gah was on the verge of being overtaken by the Taliban, Marines said. Now, with support from the Task Force, the soldiers have restored stability to the town and are beginning to move offensively against the Taliban.

But task force personnel continue to exact a daily toll against the Taliban as well. On a December visit to the operations center, a dark plume of smoke rose from a road on one of the screens — evidence of a precision strike carried out only minutes before.

From the screens, Hubert said, Marines had watched a pair of Taliban fighters carrying weapons dig a hole in a road south of the Marjah district center, intending to emplace IEDs ahead of a trip Afghan National Security Forces intended to make to the center.

Afghan Air Force A-29 Super Tucanos were in the air at the time, and Marines reached out and shared what they were seeing, offering them the opportunity to take out the fighters.

“They couldn't quite get it, so we stepped in,” Hubert said. “We took the shot with F-16s and killed the two enemy. So now, they're free to move toward the Marjah district center unimpeded by any kind of enemy contact right now.”

The process of identifying targets and executing strikes is a collaborative one, Hubert explained. Often the Marines will share what they're seeing and make recommendations to the Afghan troops about how to respond, but leave the decision-making to them. The Afghan troops also play a significant role in the intelligence-gathering: in addition to ground reports, they maintain their own ScanEagle drone, its footage featured on one of the screens at the operations center.

As one target smoldered on the screen, Marines were tracking another: two men traveling up a road, south of friendly forces, one carrying a weapon on his back, concealed by clothing.

“We can see by the shape and size of what it looks like, then we'll see him take it out,” Hubert explained.

In the course of several hours that morning, the Marines would coordinate the elimination of a half-dozen Taliban fighters.

The recent strike against Mohammad, and the daily strikes on Taliban targets, illustrate the intensity of the fight the Marines are still waging, albeit from a greater distance than they were during active combat in support of Operation Enduring Freedom four years ago.