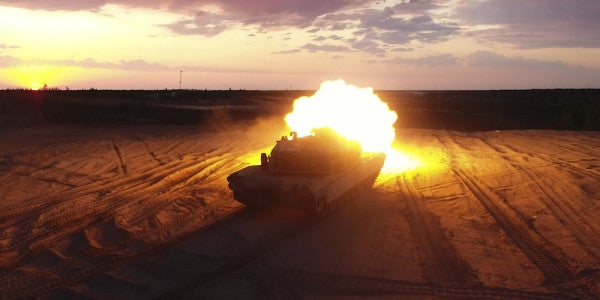 Marines from the 4th Tank Battalion, 4th Marine Division withdrew tanks and weapons from secret caves in Norway earlier this month, taking them east to Finland, where, for the first time, they took part in the annual mechanized exercise called Arrow 18.

The drills took place from May 7 to May 18 in southern Finland, which shares a long border with Russia and has a history of conflict with its larger neighbor. It involved about 150 armored vehicles and 300 other military vehicles. Only 30 Marines took part, but they were joined by thousands of personnel from Norway and Finland.

The live-fire event is led by the Finns, who perform the exercise with partner forces to test the fitness of their military, which is largely made up of conscripts.

Related: The Army’s Ironhorse Brigade Is Taking A Critical New Route To Its Station In Europe »

The Marine Corps began storing vehicles, weapons, and other supplies in caves in Norway during the Cold War in an effort to pre-position equipment in case of conflict. The gear is housed in a chain of six caves in the Trondheim region of central Norway; the exact location is not known.

Three caves have everything from rolling stock to towed artillery. The other three hold ammunition, officials told Military.com last year. There is enough gear and food to stock a force of 4,600 Marines for several weeks of combat with everything except aircraft and desktop computers.

“All of our major equipment was drawn from the caves in Norway,” Capt. Matthew Anderson, a tank commander who participated in the exercise, told Stars and Stripes. “This exercise would not have happened without the caves. The equipment, forward-staged, allows us to conduct these exercises. Without it, it's a whole lot less likely that we would have been as successful as we were.”

U.S. Marines with Bravo Company, 4th Tank Battalion, fire the M1A1 Abrams tank during a live-fire exercise as part of Exercise Arrow 18 in Pohjankangas Training Area near Kankaanpaa, Finland, May 15, 2018.

Tensions between Russia and other countries in Europe have been elevated since early 2014, when Russia intervened in Ukraine and annexed Crimea. In the years since, NATO has reassessed its security posture in Europe, deploying more forces to eastern Europe and seeking to streamline operations.

The initiative, designated Operation Atlantic Resolve, has seen multinational forces stationed in rotations in Poland, Latvia, Lithuania, and Estonia. The US has also sought to rebuild its armored presence on the continent after withdrawing the last of its tanks in 2013.

The Army's 1st Armored Brigade Combat Team, from the 1st Cavalry Division, known as the Ironhorse Brigade, recently arrived in Antwerp, Belgium, using the trip from the port to its base in Germany as a chance to practice the overland movements that a military mobilization would require.

Marines with Bravo Company, 4th Tanks Battalion, fire the M1A1 Abrams tanks during a live-fire exercise as part of Exercise Arrow 18 in Pohjankangas Training Area near Kankaanpaa, Finland, May 16, 2018.

Niether Finland nor Sweden are NATO members, but both countries have worked more closely with each other and the defense alliance to develop military capabilities and maintain readiness. Helsinki said in early 2017 that it would increase troop numbers by 20% and add to its defense budget in response to rising tensions with Russia.

Russia singled out those moves closer to NATO by Finland and Sweden as a matter of “special concern.” Russia has also criticized neighboring Norway for allowing a US Marine rotational force to be stationed in the country — the first time a foreign force has been posted on Norwegian soil since World War II.

The Marines deployed to Finland with M1A1 tanks for the exercise, where they were joined by soldiers from the Army's 2nd Cavalry Regiment using Stryker armored vehicles. U.S. personnel and a Finnish mechanized infantry brigade took part in a mock battle in woods and marshland in the western part of the country.

The exercise saw Marines working with Finnish soldiers to attack the enemy, a role filled by other Finnish troops. “We would punch holes through the enemy lines and the conscripts would come in and give us support,” Anderson, the tank commander, told Stars and Stripes.

Finnish army cooks also supplied troops in the field with hot meals every day, sparing soldiers and Marines from having to eat Meals, Ready to Eat. “It doesn't get any better than that,” Anderson said.

The territory presented a new challenge for the Marines. “We're used to operating in open terrain,” Anderson told Stars and Stripes. “This is very different. It is very forested, and we've had to adjust to the way Finnish tankers fight, more closely together.”

One of Finland's Leopard 2 tanks got stuck in a swamp during the training, giving Marines a chance to show off. “That was a lot of fun for my crew,” Sgt. Jonathan Hess, a recovery-vehicle mechanic, told Stars and Stripes. “We showed the conscripts how to do recovering with our vehicle, because they have nothing like what we have.”