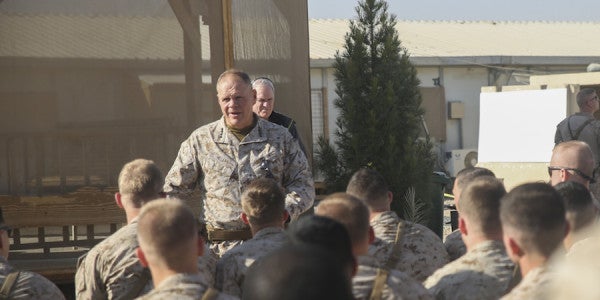 The roughly 300 Marines that make up Task Force Southwest, the unit advising Afghan soldiers in their fight against the Taliban here, are nearly done with their eight-month deployment. But they won't make it home in time for Christmas. Despite festive touches scattered around base including a Santa sleigh and a Christmas tree made out of sandbags, it doesn't feel much like the holidays.

The commandant of the Marine Corps knows what that's like.

During a visit to Camp Shorab in the middle of a nine-country tour of deployed Marine units, Neller told his own deployed Christmas story: an account of getting dressed down in 2006 by a Marine sergeant for lacking Christmas spirit.

It was close to the end of Neller's deployment, and he had reacted in frustration when he saw Christmas decorations go up at Camp Fallujah, Iraq. They just made him miss his family at home, he said.

But, in Neller's telling, the sergeant wasn't having it.

She told him to snap out of it, and reminded him he was with family for Christmas — his Marine Corps family.

At the time, Neller was the commanding officer of I Marine Expeditionary Force (Forward) and a brigadier general. And it hadn't just been a hard deployment, but also a costly one: more than 300 troops had been killed and 4,000 wounded in the area of operations. But, he said, he immediately realized the sergeant was right.

“I kind of stood there, didn't quite know what to say. I looked at my boots, raised my head, and said, 'yes ma'am, you are correct, I am sorry,'” Neller said. “'This is my family for Christmas, and I will do my best to have as good a Christmas as I can.'”

He passed the same admonition to the camouflage-clad Marines in front of him.

“This is your family for Christmas. I hope you like each other.”