A Marine pleaded guilty on June 29 to nonconsensually sharing nude photos on the Marines United Facebook group, according to a Marine... 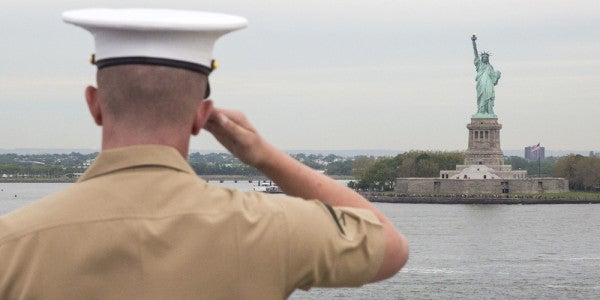 A Marine pleaded guilty on June 29 to nonconsensually sharing nude photos on the Marines United Facebook group, according to a Marine Corps press release.

The unidentified Marine was “sentenced to 10 days confinement, reduction in rank by three grades, and a forfeiture of two-thirds of one month’s pay,” the Corps said. “Additionally, the process to administratively separate the Marine is underway.”

The Marine was not identified because he faced a summary court-martial, not a general or special courts-martial, and was therefore given anonymity by the Privacy Act of 1974, Military.comreported, citing a Corps spokesman.

The Marine was the first to be sentenced in connection with the Marines United Facebook group photo scandal that broke in March, when it was discovered that about 30,000 Marines were sharing nude photos of colleagues along with personal information and even encouraging sexual assault.

The Naval Criminal Investigative Service has identified 89 “persons of interest” — 22 civilians and 67 active-duty or reserve Marines — linked to the scandal since February, the Corps said.

Five of these persons are still being investigated, while 62 have been given to Marine commands for dispositions, the Corps said.

“These cases span beyond the Marines United Facebook page and include a spectrum of behavior,” the Corps said.

Since the scandal, the Corps has updated policies, training and orders to prevent non-consensual nude-photo sharing, including the Marine Leader’s Handbook, which was created in April, the Corps said. All allegations of such misconduct are also now reviewed and investigated by NCIS.

“I think it's important to recognize that our understanding of the issue has evolved over time,” Gen. Glenn Walters Walters said in the Corps press release. “How we handle cases today is much different and more effective as a result of what occurred with Marines United.”