Marines Will Use Smartphones To Call For Artillery Support 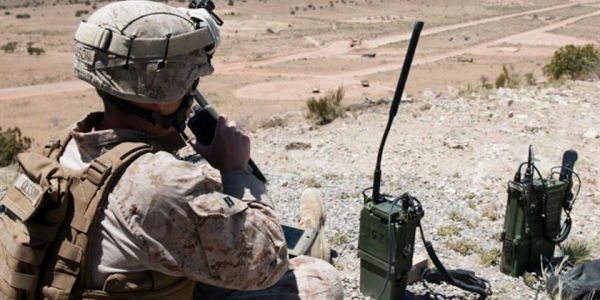 In the new year, some Marines will be using off-the-shelf smartphones to call for fire support from the air, ground and sea. An upgrade to the Marines’ current Target Handoff System, to be fielded in 2o17, will load key elements of the system onto the compact tablets, cutting the system’s weight in half, from 20 to 10 pounds, and cutting the cost in half as well, according to a news release from Marine Corps Systems Command.

The Target Handoff System Version 2 will work with the Samsung Tab 2, an 8-inch tablet that retails for about $400, Capt. Jesse Hume, project officer for the system, told Military.com. Roughly 900 Marines will receive the systems this spring, including joint fires observers, joint terminal attack controllers, forward air controllers, and air officers throughout all Marine Corps ground units, he said.

The phones will work in coordination with a laser range finder, video downlink receiver and combat net radio to enable Marines to call for fire support.

“Our current THS, though capable, needed to be smaller and lighter to better support dismounted operations,” Hume said in a statement. “With the new version, Marines will obtain a lightweight device equipped to provide immediate situational awareness on where friendly and enemy locations are, and the ability to hand off target data to fire support to get quick effects on the battlefield.”

This upgrade is also designed to be more precise and intuitive, making it easier to use and minimizing collateral damage from strikes called in.

Related: This New Way To Fix Cell Phone Infrastructure During Disasters Could Change Everything »

According to the release, the version allows Marines on the ground to rapidly pinpoint the location of a target, then send that data to supporting arms elements–either air, artillery or naval fire support. A map application on the smartphone receives target coordinates automatically generated by the system, dispensing with manual inputs and limiting the margin for error. The digitized information is then send to the relevant fire support coordination center, which determines how to make the attack.

“THS V.2 provides embedded, real-time tactical information with ground combat element units down to the squad or platoon level,” Gunnery Sgt. Nicholas Tock, the system’s operations chief, said in a statement. “If we are on patrol and we take contact from machine guns in a tree line, a satellite that passes over once every few hours is not going to help an infantry unit kill that target. THS V.2 is for that close combat.”

Soon, more Marines may have this sophisticated smartphone technology at their fingertips.

“Currently we are working with other Program Offices within Systems Command to build upon the initial fielding of the Target Handoff System,” Hume said. “The next use case we are currently working on is to get this capability down to every squad leader across the Marine Corps.”