U.S. Defense Secretary Mark Esper said that European nations should consider funding projects in their countries after the Pentagon diverted money to pay for a border wall with Mexico. 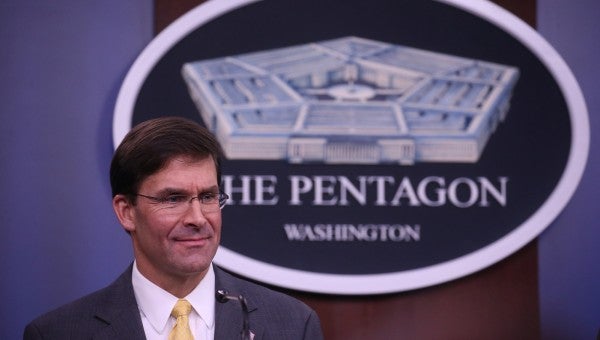 U.S. Defense Secretary Mark Esper said that European nations should consider funding projects in their countries after the Pentagon diverted money to pay for a border wall with Mexico.

The Pentagon said on Wednesday it would pull funding from 127 Defense Department projects abroad and at home, including schools and daycare centers for military families, as it diverts $3.6 billion to pay for President Donald Trump's wall along the U.S. border.

Trump has made immigration a signature issue of his presidency. He declared a national emergency over the issue earlier this year in an effort to redirect funding from Congress to build a wall along the U.S. southern border, which he originally said would be paid for by Mexico.

“The message that I've been carrying, since when I was acting secretary to today, has been about the increase in burden sharing,” Esper told reporters in London late on Thursday.

“So part of the message will be 'Look, if you're really concerned then maybe you should look to cover those projects for us' because that's going to build infrastructure in many cases in their countries,” he added.

“Part of the message is burden sharing, 'Maybe pick up that tab.'”

Some of the projects affected are in Europe, like $21.6 million for port operation facilities in Spain and $59 million for munitions storage in Slovakia.

The defunded projects also include schools for the children of military personnel in Germany and the United Kingdom.

The fund diversion has been heavily criticized by U.S. lawmakers, who say it puts national security at risk and circumvents Congress.

Esper will meet his British and French counterparts in the coming days.

The Trump administration has repeatedly called on NATO countries to pay at least 2 percent of their gross domestic product for defense.

The Pentagon has been increasing its attention toward Europe in recent years, concerned about a resurgent Russia.