Free from the INF Treaty, Esper says he wants to deploy new missiles to Asia ‘sooner rather than later’

"I would prefer months ... But these things tend to take longer than expected." 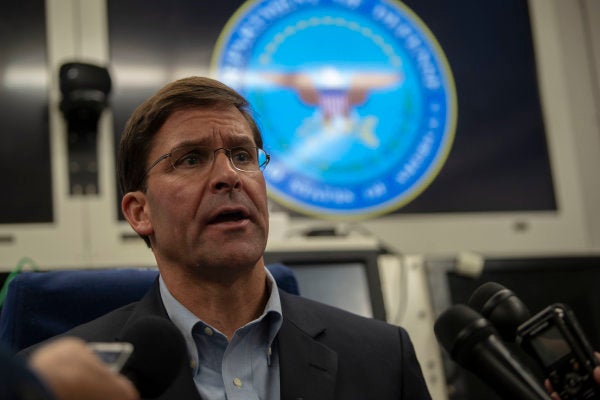 The U.S. is hoping to deploy new ground-based intermediate-range missiles to Asia “sooner rather than later,” U.S. defense chief Mark Esper said of a move that could have huge ramifications for regional security.

Esper's remarks were likely to raise already-soaring tensions with Beijing and add to fears of a new arms race involving the U.S., China and Russia.

“Yes I would like to,” Esper said late Saturday when asked if the United States was considering deploying new medium-range conventional weapons in Asia now that Washington is no longer bound by the Intermediate-Range Nuclear Forces (INF) Treaty, which the U.S. formally withdrew from a day earlier.

“We would like to deploy a capability sooner rather than later,” Esper said, according to a transcript released ahead of his arrival in Sydney for the start of a weeklong tour of Asia. “But with, you know, programs like this, it takes time. You have to design and develop, and test and do all those types of things.

“I would prefer months,” he said in regards to a deployment. “But these things tend to take longer than you expect.”

Esper did not say where the missiles would be based, but experts have said Asian allies such as Japan and Australia, as well as the U.S. territory of Guam, were among possible deployment sites.

“I wouldn't speculate because all those things depend on our plans,” Esper said. “Those are things you always discuss with your allies.”

U.S. President Donald Trump has pinned much of the blame for Washington's exit from the INF agreement on Russian violations of the landmark pact. But a closer look shows that China's buildup of its missile forces — which pose a grave threat to U.S. military bases in Japan and elsewhere in the region — also played a large part in the decision to abrogate the 1987 arms-control deal.

Trump said in October that the U.S. would scrap the 1987 treaty between Washington and Moscow, which banned all land-based missiles with ranges of 500 to 5,500 km (310 to 3,420 miles). The pact covered missiles, known as short- and intermediate-range, that can carry both nuclear and conventional warheads, but did not ban air- or sea-launched weapons.

The bilateral pact, however, had left China unconstrained to amass a missile arsenal that puts U.S. and Japanese forces at risk, according to observers. But its unraveling had been on the cards for months amid worsening ties between Russia and the U.S.

In 2014, the administration of then-U.S. President Barack Obama blamed Moscow for testing a cruise missile in direct violation of the accord. U.S. Secretary of State Mike Pompeo said Friday in announcing the formal withdrawal, that the Russian missile system prohibited under the agreement was a “direct threat to the United States and our allies.”

Washington is now free to compete with China, whose arsenal is largely made up of weapons prohibited under the INF Treaty, to which Beijing was never a signatory.

Esper said the U.S. plans should not come as a shock to China.

“That should be no surprise because we have been talking about that for some time now,” he said.

“And I want to say that 80 percent of their inventory is INF range systems. So that should not surprise that we would want to have a like capability,” he added.

This figure, however, differed from previous statements by the U.S., including one in 2017 by then-Pacific Command chief Adm. Harry Harris, the current American ambassador to Australia.

Harris told a House Armed Services Committee hearing in February of that year that approximately 95 percent of the missiles in the People's Liberation Army Rocket Force arsenal fall in the 500 to 5,500-km range — meaning key U.S. facilities throughout Japan could already be within range of thousands of difficult-to-defeat advanced ballistic and cruise missiles.

“Esper's signaling of a desire to deploy INF-range missiles to the Indo-Pacific theater is clearly a sign to China that the U.S. decision to pull out of the INF is not just based on Russia's material breach, but also on China's growing arsenal of missiles in this range,” said J. Berkshire Miller, a senior visiting fellow with the Japan Institute of International Affairs in Tokyo.

“A potential deployment to Japan, however, is not so simple and would be a politically sensitive matter for Tokyo and the alliance,” he added.

Esper's comments come amid an increasingly acrimonious trade war between the U.S. and China, as well as a plethora of security challenges facing the two countries. These include a row over freedom of navigation in the South China Sea, where Beijing has built up and fortified a series of islands.

Washington has lambasted Beijing for its moves in the South China Sea, including the construction of man-made islands, some of which are home to military-grade airfields and advanced weaponry. The U.S. fears the outposts could be used to restrict free movement in the waterway, which includes vital sea lanes through which about $3 trillion in global trade passes each year. The U.S. military regularly conducts “freedom of navigation operations” (FONOPs) in the area.

The Philippines, Vietnam, Malaysia, Taiwan and Brunei have overlapping claims in the waters, where the U.S., Chinese, Japanese and some Southeast Asian navies also routinely operate.

Neither Japan nor the U.S. have claims in the waters, but both allies have routinely stated their commitment to a “free and open Indo-Pacific.”

Beijing says it has deployed the advanced weaponry to the islets for defensive purposes, but some experts say this is part of a concerted bid to cement de facto control of the waters.

Some regional security experts have even speculated that the Chinese military may be practicing for pre-emptive missile strikes on the forward bases that underpin U.S. military power in the Western Pacific.

In 2017, U.S. naval officer Cmdr. Thomas Shugart, then a senior military fellow at the Center for a New American Security think tank in Washington, unearthed commercial satellite imagery that appeared to show sites in China's Gobi Desert for practicing these strikes that resembled mock-ups of important American military facilities in Japan such as the naval base in Yokosuka, Kanagawa Prefecture, and the air bases in Kadena, Okinawa Prefecture and Misawa, Aomori Prefecture.

According to Shugart, such a pre-emptive strike could be “a very real possibility, particularly if China believes its claimed core strategic interests are threatened in the course of a crisis and perceives that its attempts at deterrence have failed.”