Army Chief Of Staff On North Korea: ‘Time Is Running Out’ To Stop ICBM

North Korea is the single most dangerous threat facing the international community according to the U.S. Army’s top uniformed official... 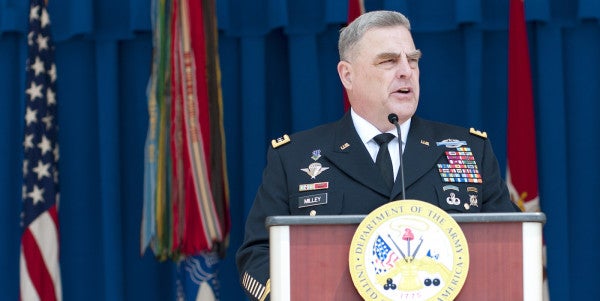 North Korea is the single most dangerous threat facing the international community according to the U.S. Army’s top uniformed official and matters are coming to a head. Pyongyang is advancing far more quickly with its nuclear and ballistic missile programs than was expected by the United States. Indeed, the United States is at point where it must make some tough policy choices on how to deal with the North Korean threat.

“We are at a point in time when choices will have to be made one way or the other, none of these choices are particularly palatable,” U.S. Army chief of staff Gen. Mark A. Milley told an audience at the National Press Club in Washington, D.C.

“But that does not relieve us of the responsibility of choice and we’re going to have to make a conscious decision that will have significant consequences… It’s not going to be a pretty picture.”

Matters on the Korean peninsula are coming to a head—Milley characterized the situation as the single most dangerous situation facing the United States today.

“This situation with North Korea is very serious,” Milley said. “Not only for the United States, South Korea and Japan, but for China and Russia… and it’s not going in a good direction.”

Milley said that the United States is doing what it can diplomatically and economically to prevent North Korea from developing and possessing a nuclear weapon that is capable of hitting the United States—as has been American policy for years.

“There is still time left for that to succeed,” Milley said.

“However, time is running out.”

It is unclear what the United States can do to prevent North Korea from developing and fielding a nuclear-tipped intercontinental ballistic missile short of a preemptive nuclear strike. Pyongyang has little incentive to give up what it sees as its trump card to ensure the survival of the Kim regime.

“Only an atomic bomb offers certain deterrence against the overwhelming military power of populous and prosperous South Korea backed by the U.S. superpower,” Doug Bandow, a senior fellow at the Cato Institute wrote forThe National Interest.

“Nuclear weapons also are a handy weapon of extortion. The ultimate bomb offers an important reward to a military that plays an important political role.”

Indeed, when the United States helped to overthrow Muammar Gaddafi in 2011 after the Libyan dictator had agreed to give up his weapons of mass destruction, Pyongyang became even more determined to hold onto its nuclear weapons. Essentially, North Korea made the simple realist calculus that a weapon that might deter the United States and preserve the regime trumps any economic or diplomatic benefit.

“Libya’s nuclear dismantlement much touted by the U.S. in the past turned out to be a mode of aggression whereby the latter coaxed the former with such sweet words as ‘guarantee of security’ and ‘improvement of relations’ to disarm and then swallowed it up by force,” the North Korean Foreign Ministry stated at the time—denouncing negotiations as a prelude to disarm to regime prior to an invasion.

But military action might prove to be unavoidable. If the situation on the Korean peninsula devolves into open warfare, the United States and South Korea would undoubtedly destroy North Korea’s military. But the cost would be extremely high—particular for the civilian population in Seoul and other large cities in the region. “A war on the Korean peninsula would be terrible,” Milley said. “However a nuclear weapon detonating over Los Angeles would be terrible.”