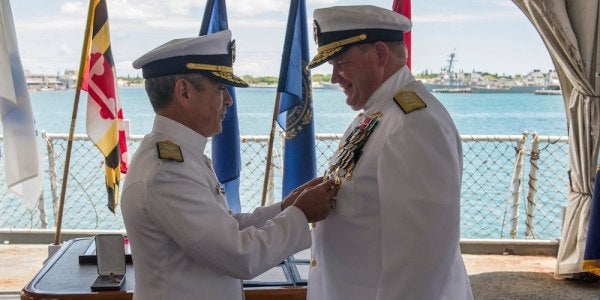 A retired two-star admiral and former Trump Administration nominee repeatedly solicited and accepted gifts from military contractor Leonard Glenn “Fat Leonard” Francis and used his position as the commodore of Destroyer Squadron 15 to benefit Francis’ company, according to a letter of censure released Friday.

The letter, signed by Secretary of the Navy Richard Spencer, details events from 2007 to 2009 when Rear Adm. Mark C. Montgomery accepted meals and hotel stays for himself and his family while providing Francis with information about ship movements and the names of other officers he could invite to his lavish dinners.

He also lied to Navy investigators in January when he submitted a written statement denying his involvement with Francis, the letter says.

In June, Montgomery was nominated by President Trump for an administrative position at the U.S. Agency for International Development. That nomination was withdrawn just before the Navy announced his censure.

Although announced in November, the details of Montgomery’s graft were only made public on Friday in response to a Freedom of Information Act request from The San Diego Union-Tribune and other media organizations.

According to Navy investigators cited in the letter, Montgomery accepted gifts of meals and hotel stays in excess of $6,000 and helped Francis plan a lavish $32,000 dinner at the Pierre II restaurant in Hong Kong. Montgomery even signed a menu commemorating the event, the Navy says.

Minutes after the company, Glenn Defense Marine Asia, was notified of Montgomery’s action, someone from the company, whose name was redacted from the letter — perhaps Francis — said of him in a comment “Top shelf friendship!! Ha Ha!!”

That October, Montgomery provided Francis with advance notice that a Navy ship would be visiting Kota Kinabalu, Malaysia, a port Francis controlled. In exchange, he asked Francis to put his family up in a Hong Kong hotel the next month. Francis arranged for an upgraded room, for which GDMA paid $2,609.

In the spring of 2008, Francis and GDMA paid almost $2,000 for Montgomery’s stay at the Hong Kong Grand Hyatt, the letter says. Just before his hotel stay, Montgomery gave Francis five-months notice of the Navy’s plans to visit Cambodia and Vietnam, the document states.

In December of 2008, Francis and GDMA again paid for a hotel upgrade for Montgomery and his family, this time in Singapore. When offered the $1,600 upgrade, Montgomery said he would be “thrilled” to take it, Spencer’s letter says.

Francis, also known as “Fat Leonard” because of his size, was a Malaysian defense contractor who provided husbanding services for Navy ships in the western Pacific for more than 20 years.

His criminal enterprise ensnared dozens of naval officers. As many as 200 were investigated by the Navy. Beginning with his arrest in a San Diego hotel room in 2013, the Justice Department began unraveling Francis’ web, one string at a time.

Among those in thrall to Francis was John Beliveau II, an Navy Criminal Investigative Service agent who served as the contractor’s mole, helping him keep one step ahead of authorities. In 2016, Beliveau was sentenced to 12 years in prison.

Other officers, accused of less serious offenses, received significantly lighter sentences. Those whose actions did not rise to the level of federal prosecution were turned over to the Navy for potential prosecution under military law.

Montgomery’s censure is unlikely to quell the critique that the Navy has gone easy on its own.

A Navy spokesman declined to comment on the Navy’s decision not to prosecute Montgomery under the Uniform Code of Military Justice.

The Justice Department could not be reached for comment late Friday to discuss its decision not to pursue criminal charges against Montgomery.

Francis’ tactic was to cozy up to naval officers as a friend, find out their weaknesses and then exploit them. He plied officers with cash, fine dining, travel and high-dollar prostitutes across Asia.

In a deposition in a military courtroom this summer, Francis said the investment was worthwhile. Officers would provide him with information about ship movements and information about other officers he might be able to target for his conspiracy.

Others would provide proprietary information from his competitors in the region, allowing him to tailor his bids for lucrative husbanding contracts. He was also able to corrupt those in charge of approving those contracts.

Francis would then overcharge Navy ships for services in port by inflating the amount of sewage his company removed from ships, for instance, or having his employees produce fake invoices from non-existent sub-contractors — all in an effort to squeeze the Navy for millions of dollars in overcharges.

Francis pleaded guilty in 2015 to bilking the Navy for $35 million. He is cooperating with prosecutors while he awaits sentencing. He is battling stage four cancer and living under house arrest somewhere in San Diego County.

Montgomery, who is retired, will not face any further consequences for his graft, save the stain on his record and the revocation of his end of tour award from his time as the commander of Destroyer Squadron 15.

A slew of officers from the Navy’s Seventh Fleet await trial in San Diego. In total, 33 people have been charged in the conspiracy, with 22 pleading guilty. Navy Captain Jeffrey Breslau, the former lead public affairs officer for the U.S. Pacific Fleet, was the latest. He pleaded guilty last month.

Montgomery was the sixth admiral to be censured by the Navy. Two others were charged with crimes. Rear Adm. Robert Gilbeau was sentenced in 2017 to 18 months in prison. He was released last month.

The other, Rear Adm. Bruce Loveless, is among the Seventh Fleet officers awaiting trial.