Although I am a Puerto Rican Jew, I once was nearly married to an Egyptian-Muslim man. It’s up to the... 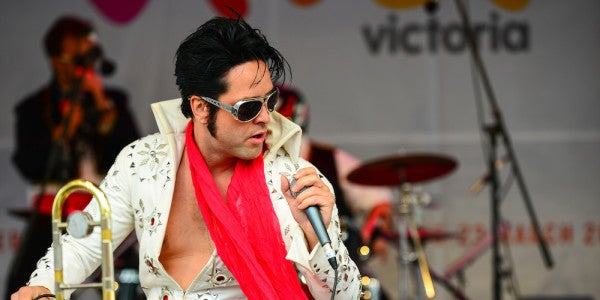 Although I am a Puerto Rican Jew, I once was nearly married to an Egyptian-Muslim man. It’s up to the reader to decide whether or not it was for the right reasons, however unconventional.

Ameer was a close, good friend of mine and a fellow US Marine aircrew-mate, who was of Egyptian-American Muslim persuasion. Ameer and I were kindred opposites with momentary aligning destinies. Sixty miles away, living in our separate hometowns in the late-1990’s, we were oblivious to each other’s existence. This was a time when the only war on American television sets was of a group of unbathed, super tan, conniving backstabbers who were voting each other off of an island. America was mostly torn apart over who was the better Idol, Justin or Kelly.

During this time period, he and I both had a deranged sense of adventure and set of cojones big enough to make even the most jaded Spaniard say, “¡Olé!” We wanted to see the world while amassing money for college. More importantly, we needed that yielding sensation of discipline that only a proverbial combat boot in the ass could provide. However (and most importantly), we needed a sense of belonging that our parents could no longer provide for us: his recently returned to Egypt and mine recently returned to their Maker. All these ingredients were critical for making the decision not only to join the military, but to make that impudent reckless extra step by enlisting in the elite Marine Corps.

He enlisted in ’98 and I in’99, and we endured very similar treatment in boot camp. We were comic fodder for our respective drill instructors due to our respectively obscure religions. Being non-Christians, we were offered a place of alternate worship on Sundays instead of church: Parris Island’s American Chapel for All of the Religiously Less-Trendy (or what it was actually known as, The Religious Ministries Center—RMC). RMC provided a small, single roof far all religious non-Christians (or unconventional practitioners therein) to worship. The motley crew who were welcomed in this one room of worship included Scientologists, Hindus, Jews, Muslims, Buddhists, Shinto, Mormons, Church of God, etc. But, for some reason, most of us didn’t take the place seriously and decided to opt for barracks cleaning detail instead, while our fellow recruits were off singing “Hallelujah.”

Ameer and I were to meet three years later at our permanent duty station in Newburgh, NY. He was a laidback, genial flight mech with a harmonica; I was a sassy, sarcastic navigator with a straw cowboy hat. We hit it off from the start with our mutual adeptness at being weird and appreciation for off-putting humor. We made many self-deprecating jokes and laughed at our own expense because we just didn’t take matters of our religious identity too seriously. We didn’t care that we stood out from all the white Christian flight crewmen and eventually, neither did most of them as well. So, the times became bearable between us all, despite the war.

Things were no different during this one assignment we had in Las Vegas. Late in 2003, we were conducting military training missions for a month over the deserts surrounding Las Vegas. As luck would have it, Nellis Air Force Base (where we were parking our aircraft during that month) was fresh out of lodging accommodations for our crew. We were then given—which of course is what every member of the crew of drinking and gambling age did. We spent our afternoons updating our flight status currencies in preparation of another upcoming deployment to the Middle East.

After each six-hour daily afternoon mission, our crew was unleashed into Glitter Gulch. One hazy night, our crew got to thinking over too many gin/vodka tonics. Ameer was the only Muslim crewman in our unit. I was the only Jew, perhaps in the entire active-duty US Marine Corps. With this in mind, we thought it would be hilarious if he and I were married with the rest of our flight crew serving as the wedding party. We planned to annul it before leaving by citing ‘Irreconcilable Differences.’

The flight commander, an atheist, instructed the otherwise Christian crewmen to draw straws for the position of Maid of Honor. Jeff, the six-foot, broad-shouldered loadmaster ‘won’ the promotion and was given a subsequently procured title-bearing tiara. I wanted a Hindu Elvis impersonator to preside, but both of the ones we uncovered were off that night. I was adamant that we needed one to make the event complete. Weaving in my bar stool, I firmly stood my ground: “No Hindu Elvis = No sham wedding!”

After several fruitless efforts to find yet another one, we decided then to just go through with it the following night. We promised we wouldn’t chicken out, until the following day came along with our resurrected sobriety, which dictated we were all a bunch of idiots with not enough per diem to waste on gambling, matrimony or otherwise.

RichelleSpanover is co-holder of the Marine Corps Chair in the Long March’s Council of the Former Enlisted. She was an enlisted aircrew navigator in the Old Corps, flying on the KC-130 Hercules. She deployed in 2002-2005 to Bahrain, Kuwait and Iraq. She is now finishing an MFA program in Nonfiction Writing at Columbia University.