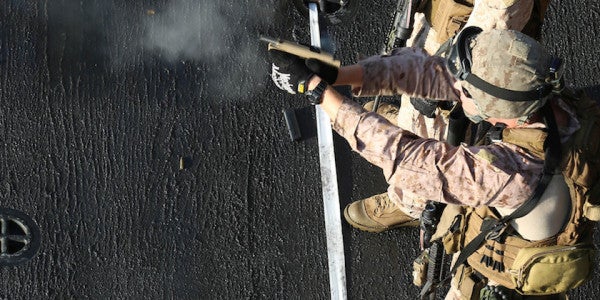 Marine Corps Special Operations Command has decided to shelve its custom .45 pistols and outfit its elite Raiders with Glock 19s.

MARSOC has not yet responded to Military.com’s questions for the story, but a source familiar with the effort said the command made the decision within the last month.

The move, first reported by Jeff Schogol of Marine Corps Times, follows a Marine Corps decision in February that MARSOC operators to carry Glock pistols, since many of the elite outfit’s members prefer the popular Glock 19 9mm handgun over the custom .45 pistols the service bought them in 2012.

The reliable, easy-to-maintain 9mm pistol features a polymer frame and a 15-round magazine.

The Marine Corps just completed an exhaustive search for a new MARSOC pistol in 2012. The service awarded a $22.5 million contract to Colt Defense LLC., for up to 10,000 Close Quarter Battle Pistols.

The custom, 1911 design replaced the fleet of worn-out MARSOC M45 pistols. It features a rail for mounting lights, a custom trigger, a manual safety, improved ergonomics and glowing Tritium sights for low-light conditions.

The new .45s are nice, but many MARSOC troops prefer to carry Glock 19s instead.

One reason for the change is that 9mm ammunition and Glock replacement parts are available almost anywhere in the world, the source said.

The decision is not that surprising since U.S. Army Special Operations Command has also chosen the Glock 19 for its elite units such as the 75th Ranger Regiment, the source said.