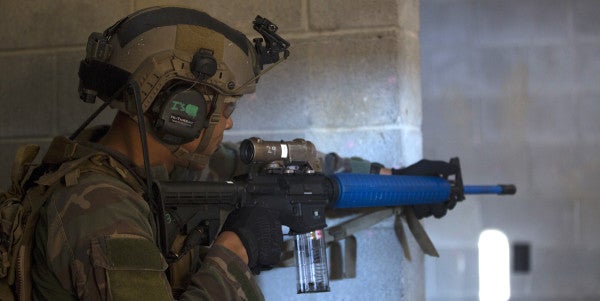 If the Marine Corps gets its requested 12,000-troop boost to reach an end strength of 194,000, its elite special operations command will be growing too, the commander of MARSOC said Tuesday.

And that growth could be the most significant manpower increase within U.S. Special Operations Command in some time.

“We would call it getting healthy and fixing the force and getting MARSOC to a level commensurate to the original vision of where we need it to be,” he said. “There are certain parts of the MARSOC community that are stressed more than others. We want that capability so we can get a little more balanced in our ability to provide forces downrange.”

The prospect of growth within SOCOM is significant as the entire command has been subject to a personnel cap of 69,700 that took effect in 2013 as part of the Budget Control Act.

Lt. Gen. Thomas Trask, vice commander of SOCOM, said it had been on track to grow to between 72,000 and 73,000 troops and civilians when the troop caps took effect, essentially freezing topline growth for four years and counting.

Still, Trask said, it was a better deal than was offered to the services — a number of which, including the Marine Corps, had to shrink significantly.

But of all the special operations component commands, MARSOC may be the best candidate to get bigger, he said.

With an end strength of 2,742, including roughly 960 critical skills operators, MARSOC represents just 1.5 percent of the total Marine Corps Force, which stands today at 182,000. By comparison, as of fiscal 2014, the Navy's special operations component made up 2.6 percent of its military force; the Army's, 3.2 percent; and the Air Force's, 3.1 percent, according to a Government Accountability Office assessment.

MARSOC, which at 11 years old is the most junior of the special operations service components, makes up about 3 percent of the SOCOM total force, but completes nearly 9 percent of the command's operations and deployments, command spokesman Maj. Nicholas Mannweiler said.

Because of these factors, Trask said MARSOC is a strong candidate for growth.

“We recruit for most of our specialties from the conventional services. And, in some cases, there's more recruiting ground than others, depending on the size of the service,” he said. “We think our Marine Corps component is a much smaller by percentage component of their service than some of the other components. So we think there is some recruiting room inside the Marine Corps.”

“It's all pre-decisional,” Mundy told Military.com, declining to specify what specialties are targets for prospective growth. “If the Marine Corps is going to [194,000], there is every likelihood that we would have our commensurate piece of that. We're all kind of dealing with what that would look like, what are our needs, what do we think the future requirements would be.”