Over the past two years, U.S. Marine Corps Forces, Special Operations Command has matured from merely being known as U.S.... 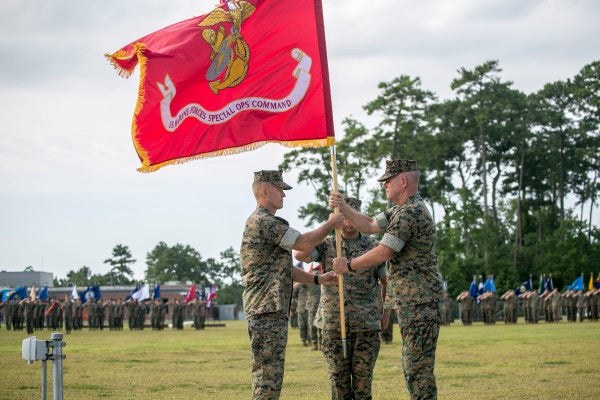 In ceremonies throughout the last week, the Raiders of MARSOC have commemorated a decade’s worth of accomplishments — as well as losses — in the command’s short but distinguished existence.

A final celebratory event marked a milestone in the command’s history and the start of a new chapter: the changing of command between two storied officers.

Gen. John M. Paxton Jr., the 33rd assistant commandant of the Marine Corps, presided over the ceremony and spoke briefly about Osterman’s exceptional performance as the commander of MARSOC.

“You pushed that envelope, General Osterman, and you pushed it by organizing, training and equipping at the individual level, building competent small units and teams, and have proven operational capability on behalf of Marine forces, Naval forces and special operations forces,” said Paxton. “So on behalf of the institution: a job well done. We’re proud of your leadership; we’re grateful for your accomplishments.”

Major highlights of Osterman’s command included the regionalization of the three Marine Raider battalions and their corresponding support battalions, expansion and operational integration of the component’s intelligence capabilities beginning at the Marine Special Operations Team level, and other support innovations to forward-deployed elements. He expanded the command’s information operations capabilities and oversaw the development of the Special Operations Forces Liaison Element concept, which integrates planning and coordination between special operations and Marine Expeditionary Units. Lastly, he oversaw the first deployment of a Raider-led Combined Joint Special Operations Task Force in any of the geographic combatant commands.

“For a change of command-type situation, the focus tends to go on the commander as we pass the colors but today really is about MARSOC,” said Osterman. “The ten years that MARSOC has been in existence – that we just celebrated – amazing people have come through the ranks, who have done incredible things.”

Osterman went on to cite MARSOC’s footprint in Afghanistan and the shift in the component’s focus to regionalized battalion areas of responsibility.

“For those who don’t know, there are MARSOC members, right now, that are spread all the way from Africa, through the Middle East, all the way out to the Pacific,” said Osterman. “One of the big things I had to do was adjust my thoughts from maneuvering battalions and regiments when I got here, to understanding that small teams can have strategic effects out in the battlespace.”

After addressing those in attendance at the ceremony, Osterman gave the floor to Mundy.

“I’m privileged to be able to be a part of this wonderful organization. I cannot say it better than what General Paxton and General Osterman said,” explained Mundy. “Let me just say — turning to face you all, because you are all the most important people here — everyday I’m in this billet, it will be a privilege to serve alongside you, and an honor to command you.”

In a letter addressed to the incoming and outgoing commanders, Marine Commandant Gen. Robert B. Neller expressed his view of MARSOC’s immediate future.

“[Maj. Gen. Mundy], know that you have my total trust and confidence. I know you will bring the same outstanding leadership to this assignment that you demonstrated as commanding general of 5th Marine Expeditionary Brigade in Bahrain, and in your previous command assignments,” said Neller.

Neller stated that Marine Raiders will continue to set the standards for excellence and are instrumental in shaping the national security environment and providing decision space for our national leaders.