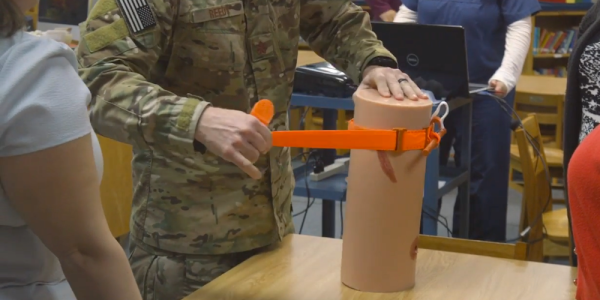 But a recent weekday found him far from the battlefield — sitting in a small chair in the library of St. Barnabas Catholic School. Between shelves lined with storybooks and trophies, a trauma nurse cinched a tourniquet over a foam log. Then she packed a hole with gauze to demonstrate how a teacher might prevent bleeding from gunshot wounds.

“When we hold direct pressure, we are committing ourselves to that person,” said the nurse, Lina Evans. “We are going to lean our whole bodyweight into that wound.”

UAB is the first hospital in Alabama to offer Stop the Bleed training in schools. Medical professionals, including trauma surgeons and nurses, demonstrate how to apply tourniquets, pressure, and dressing to life-threatening wounds. They also provide kits that contain latex gloves, tourniquets, and bandages for every classroom in the school.

The training session at St. Barnabas included Mitchell, Evans and about a half-dozen other members of a UAB trauma team. Mitchell serves in a special Air Force surgical unit that works with civilian trauma teams at UAB Hospital between deployments.

The Stop the Bleed team has steadily worked its way across Jefferson County, starting with schools in Homewood and other suburbs. Interest in the program increased after the recent shooting at Marjory Stoneman Douglas High School in Parkland, Fla. This week, school violence hit close to home when gunfire killed one student and injured another at Birmingham's Huffman High School.

Mitchell's unit treated about 750 bleeding injuries during their last deployment — many from gunshots, blasts, and shrapnel. When those injuries happen in battle, medics often reach for tourniquets, which can stop bleeding and prevent death.

“Around the early part of 2004 in Iraq, the military realized tourniquets were saving lives,” Mitchell said. “Now it's 2018 and we're putting them in classrooms.”

St. Barnabas is an elementary and middle school in Birmingham's East Lake neighborhood. The small two-story campus curls around a courtyard that connects to the handsome church next door. During the training session, the sounds of bouncing basketballs and children's laughter clattered down the cinder block hallways.

Evans, a trauma nurse at UAB, began with a presentation about blood loss prevention. She explained that tourniquets could be applied high on the arm or leg to stop bleeding from an injury to the limb. If a child was too small for the tourniquet in the kit, a teacher can pull together a makeshift version from pencils and wide rubber bands, she said.

Tourniquets are safe, she said, and very effective. For years, they fell out of favor due to concerns they could cause damage to arms and legs, but research has shown tourniquets applied for two hours or less rarely cause lasting injuries.

Evans said she has been trying to get the training into schools in Shelby County, where she lives and serves as coroner. So far, none of the schools have accepted.

“I'd rather see them on this side than the other side,” she said.

Dr. Virginia Strickland, a trauma surgeon at UAB, said school districts initially resisted the tourniquet training. Most teachers and administrators don't want to believe a school shooting could happen to them, but Strickland explained the skills could come in handy after accidents and other injuries.

“Our kids go to school here too and we wanted to do what we could,” Strickland said. “It took a bit of persistence, from our standpoint.”

The idea began with a grant to help train police and firefighters on the proper use of tourniquets, said Maj. Cade Reedy, a trauma nurse with the U.S. Air Force. After the Sandy Hook shooting in 2012, the American College of Surgeons began a campaign to improve access to tourniquets and training called Stop the Bleed. The Birmingham team that trained first responders decided to take its expertise into schools.

Bleeding can cause death in five to eight minutes, Strickland said. It may take much longer than that to secure and clear a building in the event of a shooting, she said.

“The person that's going to save your life is the person sitting next to you,” she said.

After Evans finished her presentation, teachers at St. Barnabas practiced the techniques on foam logs. Nurses and doctors adjusted tourniquets and explained how to apply direct pressure.

Her students know what to do, she said. When they hear the code come over the speakers, they hide and lock the door. Now Dennis said she also knows what to do if one her students becomes gravely injured. Although she's had first-aid training in the past, it didn't cover tourniquet use or bleeding control, Dennis said.

Dennis said she doesn't spend a lot of time worrying about school shootings, but did leave the training with an improved confidence in her ability to respond to an emergency.

“We know the proper protocols and procedures,” she said. “We put our faith first, but we're also prepared for the worst. It's the only thing we can do.”