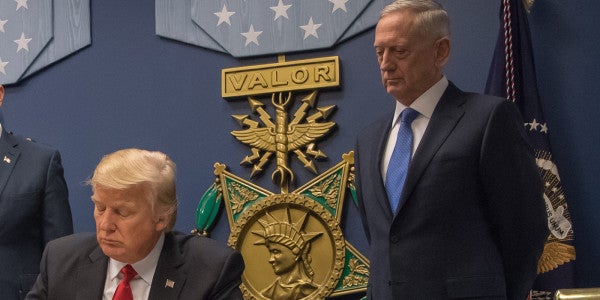 “Recent reports that the president called for an increase in the US nuclear arsenal are absolutely false,” Mattis said in a statement. “This kind of erroneous reporting is irresponsible.”

According to an NBC News report published early on Wednesday, Trump expressed dismay at the state of the US nuclear arsenal in a July 20 meeting after seeing a chart showing the decline of the stockpile since the 1960s.

Trump reportedly said he didn't want to be at the bottom position on the chart's downward-sloping curve and called for a tenfold increase.

Prior to Mattis' statement, Trump himself rejected the report. “Fake @NBCNews made up a story that I wanted a 'tenfold' increase in our U.S. nuclear arsenal. Pure fiction, made up to demean,” Trump tweeted, comparing NBC to CNN, which he has also inveighed against over what he has deemed “fake news.”

According to the NBC News report, Trump's call for an increase in the nuclear stockpile surprised the officials present at the meeting, among them the Joint Chiefs of Staff and Secretary of State Rex Tillerson.

Officials then explained to Trump the legal and practical hurdles to such an expansion of the US's nuclear arsenal and told him that the current military posture was stronger than when that arsenal was at its peak.

The meeting, a review of the US military's forces and operations worldwide, was at times contentious, and, according to a previous NBC News report, at its conclusion, some officials present heard Tillerson refer to Trump as a “moron.”

Asked about Tillerson's supposed comment in a Forbes interview published on Tuesday, Trump called it “fake news,” though he added, “But if he did that, I guess we'll have to compare IQ tests, and I can tell you who is going to win.”

Later on Tuesday, when asked if he had confidence in his secretary of state, Trump said only “yes.”