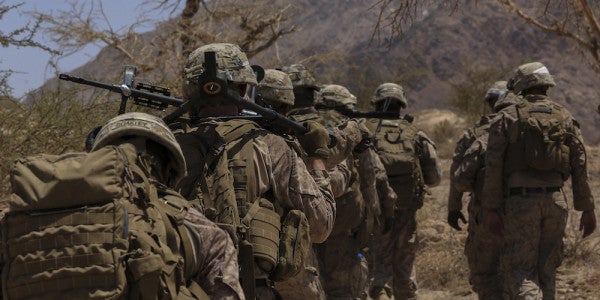 CAMP TITIN, JORDAN – “Now move from the 25 yard line to the 15 yard line,” shouts one of the U.S. Marines training soldiers from the 77th Royal Jordanian Marine battalion. An observer can't help but wonder if the football imagery gets lost in translation when it is repeated in Arabic as the Jordanians march forward through the dust. At their new tape mark on the desert floor, they raise their M4 assault rifles and rip apart the quiet, plugging scores of live-fire bullets into wooden targets mounted to a wall of tires beneath the Aqaba Mountains.

Here in this desolate camp, encircled by roaming dogs and acres of empty desert, Americans are teaching Jordanians how to shoot. But it's a specialized kind of shooting, close range and reactive, in a variety of deadly situations.

“The Marine trainers in Titin are part of a wider Department of Defense effort to improve the capacity of the region's militaries,” said Maj. Adrian Rankine-Gallowy, a Pentagon spokesman. “This approach involves thousands of U.S. troops throughout the Middle East who provide various kinds of training, from basic infantry tactics to flying advanced aircraft.”

It's always been a complex job, requiring U.S. soldiers to help foreign allies fight wars without fighting themselves. The advisers go through training that includes culture, language and mentoring, and has in the past — in Iraq, Syria and Vietnam even — led to mixed results.

Reporters traveling with Secretary of Defense James Mattis in the Mideast got an up-close look at how these adviser/soldiers operate during the training exercise outside Aqaba.

“It's tactical training. We teach their trainers how to do it, then our trainers come out,” Mattis said aboard his plane on the way to Kuwait.

Defense Secretary James N. Mattis speaks with the media during a flight to Kuwait from Aqaba, Jordan, Dec. 3, 2017. Mattis flew on to Pakistan today after stops in Egypt, Jordan and Kuwait to reaffirm the enduring U.S. commitment to partnerships in the Middle East, West Africa and South Asia.Photo via DoD

“We're teaching them on rifles and pistols and different pieces of equipment that we train on as well,” said Maj. Ryan Cocciolone, who used to live in Denver. That includes the M4 carbine, the M16 rifle, the M249 light machine gun, also known as the saw, and eight new mortars that are on their way to Camp Titin, courtesy of the United States.

The Jordanians are freshly minted Marines, just finished with commando training, so the training this day is focused on fundamentals. But marksmanship is just a small piece of a trainer/adviser's job.

But why do Jordanians and other armies in the Mideast still need the help of U.S. soldiers after all these years of war?

“We can gain a lot of their experience and expertise,” answers Col. Hishan Aljarrah, head of the 77th Royal Jordanian Marine battalion, whose desert camp hosts the joint exercises.

“This battalion is newly established,” Aljarrah says, just 8 years old. “Jordanian forces are good enough, but U.S. Marines have been all over the world,” and have been doing what they do for more than 200 years.

Such arrangements help relations between allies in the fight against extremism as well, soldiers on both sides believe. The bond between Jordanian and U.S. Marines is “tight,” Aljarrah says. He moved his soldiers into the same living quarters as U.S. soldiers, and now the Marines socialize together as well as field train together. Those off-hours are more important to the U.S.-Jordanian partnership than anything, Aljarrah said.

Four Mideast countries converge in this corner of the world: Israel, Jordan, Saudi Arabia and Egypt. Titin Camp, hard up against rawboned, red-dirt foothills south of Aqaba, has a direct view across the Red Sea to Egypt and the Sinai peninsula, where 305 people were gunned down just days ago in an attack linked to ISIS.

“The more pressure put on Sinai, the more cautious we are,” Aljarrah said. The intensity of the training has stepped up as a result, for Americans and Jordanians.

If an attack came against one of the posh resorts or plentiful mosques in Aqaba, the Jordanians would be first responders.

“We would have a role downtown providing security, checkpoints throughout the city, and protecting the main gate of the busy port,” Aljarrah said.

But Cocciolone and other U.S. advisers would stay behind in Camp Titin.

“We would not join the fight if there was an attack in Aqaba,” Cocciolone said. He and other Americans here are truly advisers, not deployed combatants.

“Reserve units are used because they contain more experienced senior leaders” who aren't likely to be actively deployed in combat roles. They are usually deployed in their training assignments for about 11 months.

If the camp were attacked, the Americans wouldn't hesitate to defend themselves, of course, although Cocciolone trusts his Jordanian comrades in arms to take care of any threat.

In the gaggle on the plane later in the day, Mattis said Americans learn much from those they teach.

“We learn a lot from others on this because they have ways of dealing with different organizational efforts with security, tribal groups, religion groups. Our people come out of this with a broader framework for solving problems elsewhere.”