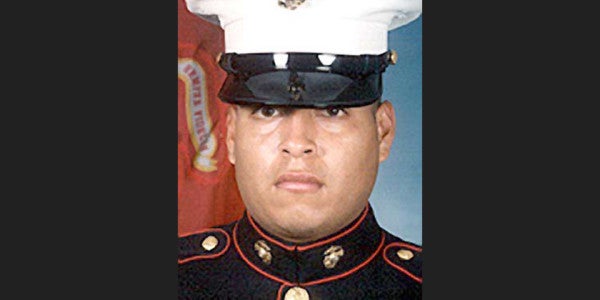 On Monday, Rep. Duncan Hunter, R-Alpine, sent him a letter urging the Pentagon to upgrade Peralta’s Navy Cross for combat valor to the Medal of Honor. It’s the latest effort in a case that has included forensics experts, rejections by at least three previous defense secretaries and conflicting accounts from Marines who served with Peralta.

“Jim Mattis can now make the right decision on this after others have failed to do that,” said Hunter, a former Marine artillery officer who fought in Iraq.

Peralta was a San Diegan who died in the second Battle of Fallujah in Iraq. President George W. Bush praised him in a nationally televised speech, and he has been lionized in books and a documentary. The Navy has named a warship after him; the destroyer is scheduled to reach its home port of San Diego for the first time this summer.

While assigned to A Company, 1st Battalion, 3rd Marines, Peralta in Fallujah led a team clearing insurgents room by room. Storming into their seventh house on Nov. 15, 2004, Peralta immediately drew enemy automatic weapons fire. He fell, wounded, to the floor.

Fleeing insurgents tossed a grenade that skittered to a rest near his head. Without hesitation, Peralta snatched the explosive to his body and absorbed the brunt of the blast to spare the lives of his team, according to his citation for the Navy Cross, America’s second-highest award for battlefield bravery.

Although the Marine Corps recommended Peralta for a posthumous Medal of Honor, Defense Secretary Bob Gates downgraded the commendation in 2008. He expressed concerns raised by a review panel that the Marine might have been too injured to consciously shield the grenade with his body.

Hunter believes Mattis, a former commander of the 1st Marine Division in Iraq, had signed off on the initial Medal of Honor nomination for Peralta before it percolated up to the Pentagon.

On Friday, the Navy took possession of the guided-missile destroyer Rafael Peralta, which prompted Hunter to urge reopening the Medal of Honor case.

Born in Mexico City in 1979, Peralta graduated from San Diego’s Samuel F. B. Morse High School and later attended San Diego Community College. He received his green card after enlisting in the Marine Corps in 2000. He died an American citizen and is buried at Fort Rosecrans National Cemetery in Point Loma.

Although most Medals of Honor are awarded less than five years after a service member’s battlefield heroics, President Barack Obama’s administration sought to make amends for past oversights.

In 2014, for example, Obama pinned the medal on Bennie G. Adkins, a former Special Forces Green Beret who served in the Vietnam War. He followed that up with Medals of Honor for Union Lt. Alonzo Cushing, a hero of the Battle of Gettysburg, and a pair of World War I doughboys, Sgt. William Shemin and Sgt. Henry Johnson.

Hunter hopes it won’t take a century for Peralta.

“We want them to fix the institutional problem with awards,” he said. “It’s this award and quite a few others. We told them that they’ve got to fix the system because there are guys who are getting the wrong awards. Officers are getting higher awards compared to the enlisted.”