Defense Secretary James N. Mattis said Sunday that the media is not the “enemy of the American people,” refusing to... 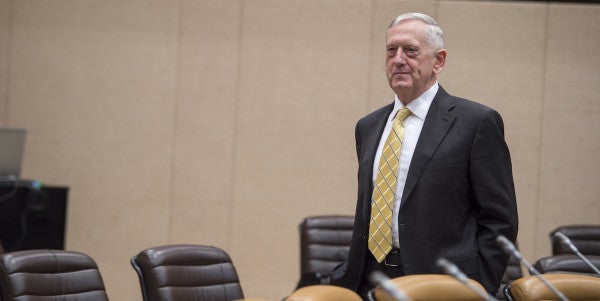 Defense Secretary James N. Mattis said Sunday that the media is not the “enemy of the American people,” refusing to align with President Donald Trump’s startling declaration last week.

“I’ve had some contentious times with the press,” he said in response to a question about whether he saw the media as an enemy. “But no, the press is a constituency that we deal with, and I don’t have any issues with the press myself.”

On Friday, Trump tweeted that the “fake news” media was an “enemy of the American people.” An initial tweet mentioning CNN, the New York Times, NBC and “many more” was deleted and reposted, expanding the list to include ABC and CBS.

The FAKE NEWS media (failing @nytimes, @NBCNews, @ABC, @CBS, @CNN) is not my enemy, it is the enemy of the American People!

Trump repeated the attack Saturday before thousands of cheering supporters in Melbourne, Fla., when he blamed the media for undermining his administration.

“I also want to speak to you without the filter of the fake news,” Trump said at the rally. “They’ve become a big part of the problem. They are part of the corrupt system.”

The fledgling Trump White House has been besieged with setbacks, including the resignation of Trump’s national security advisor, Michael Flynn, after just three weeks amid a deepening controversy over Russian interference in the U.S. government.

In response, Trump has declared a new round of battle with journalists. He called the media “fake” roughly 20 times Thursday in a rambling 77-minute news conference that also took aim at leaks from the intelligence community of classified information about Flynn’s secret talks with a Russian ambassador in December, while the Obama administration was still setting U.S. foreign policy.

Mattis insisted that the upheaval in the administration was not debilitating.

“Welcome to democracy,” he said. “It’s at times wildly contentious. It’s at times quite sporting, but the bottom line is this is the best form of government that we can come up with.”

Gen. Tony Thomas, commander of the U.S. military’s Special Operations Command, said at a military conference on Tuesday that the chaos should stop.

“Our government continues to be in unbelievable turmoil,” he said. “I hope they sort it out soon because we’re a nation at war.”

When asked about those comments, Mattis said that Thomas was “taken a bit out of context because we all want to see everything moving smoothly.”