The book, styled as a three-part course in leadership tracing Mattis' 40-year career from Marine infantryman to head of U.S. Central Command, delivers plenty of anecdotes and reflections that will satisfy admirers of the legendary general 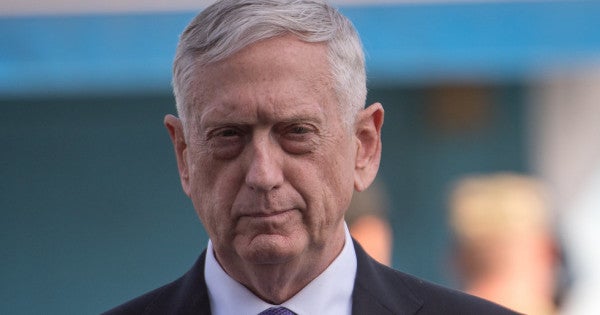 But the book, styled as a three-part course in leadership tracing Mattis' 40-year career from Marine infantryman to head of U.S. Central Command, still delivers plenty of anecdotes and reflections that will satisfy admirers of the legendary general.

Some may find it too familiar: The book, which is jargon-heavy and prone to repeating phrases such as “doctrine is the last refuge of the unimaginative,” riffs on speeches and letters from throughout Mattis' career (the letters are also reprinted in an appendix in the back for comparison) and enthusiastically reprises his greatest one-liners and slogans.

Of his two-year tenure as defense secretary under Trump that ended with his abrupt resignation in December, Mattis says simply, “I did as much as I could for as long as I could.” He won't discuss a sitting president, he explains, although certain chapters of the book, such as the one on NATO and alliances, seem especially pointed given his public disagreement with the president on the topic.

He is more free, however, in his reflection on time spent serving under President Barack Obama as commander of CENTCOM, a position he was quietly removed from in 2013 due to policy differences with the administration.

Here are 10 things you may not have known about Mattis that are revealed in his book:

As a 19-year-old student at Central Washington State College in 1968, Mattis describes being a “mediocre student” and a partier. After getting busted for underage drinking, he was sentenced by a judge to spend weekends in jail, where he pondered freedom and the power of his decisions. Though he'd be a straight-laced Marine officer only a few years later, Mattis remembered the favor done to him by the judge who sentenced him to time but didn't “ruin my future” with a criminal record. He'd later intervene on behalf of a prospective Marine recruit with an arrest for cocaine possession, giving him a second chance.

2. He asked himself a question before deploying troops

As CENTCOM commander at the Pentagon, Mattis said he never took lightly the duty of signing deployment orders to send service members overseas. A handwritten card on his desk asked the following question: “Will this commitment contribute sufficiently to the American people to justify putting our troops in a position to die?” Mattis notes elsewhere in the book how he dealt with the loss of his Marines and how seriously he took the duty of writing letters to families of the fallen. In battle, he said, he had orders not to report the names of the casualties to him, so that his emotions did not become overwhelming.

3. The man who gave Mattis his call sign became a three-star general

Mattis has let it be known that he dislikes the nickname “Mad Dog,” which has unclear origins but continues to stick to him. He is, however, fond of his call sign, Chaos — short for “Colonel has another outstanding solution.”

He got this moniker, he writes, from then-Lt. Col. John Toolan, his operations officer, who was poking gentle fun at Mattis' tendency to share notes and suggestions for improvements with Marines, perhaps to the point of annoyance.

“There's always a Toolan waiting out there to keep your ego in check, providing you keep the risk takers and mavericks at your side,” Mattis writes. Toolan would go on to command Marine Corps Forces Pacific as a three-star general before retiring in 2016.

4. Mattis had a say in Marines being the invasion force of choice for Afghanistan

After the Sept. 11, 2001, terror attacks, military brass quickly began to plan an attack on al-Qaida and the Taliban in Afghanistan. But Marines almost missed being a part of this effort, as planners including Army Gen. Tommy Franks, then CENTCOM commander, didn't see the point in sending an amphibious force into a landlocked country. But Mattis was part of a small team of officials who crafted a plan to send Task Force 58 — amphibious ships and a landing force — into Camp Rhino in southern Afghanistan.

“The minute [5th Fleet Commander Vice Adm. William Moore] pointed to a map showing landlocked Afghanistan, hundreds of miles from the sea, I knew I could land there with thousands of Marines,” Mattis writes.

5. Marines could have killed Osama bin Laden before the SEALs dead

Mattis indicates another clash with Franks, the CENTCOM commander, elsewhere in the book, when he describes the 2001 search for Osama bin Laden in the Tora Bora mountains of eastern Afghanistan. Mattis believed, with the use of light infantry and special operations troops, he could close off the escape routes and take bin Laden. Franks thought sending Marines and vehicles into the mountains would only repeat Soviet mistakes.

Ultimately, the trap was not laid, and bin Laden would not be killed until 2011. “If I had to do it again,” Mattis wrote, “I would have called both commander and Admiral Moore and said, 'Sir, I have a plan to accomplish the mission, kill Osama bin Laden, and hand you a victory. All I need is your permission.'”

6. He admired the commander he fired on the march to Baghdad

Mattis famously fired Marine Col. Joe Dowdy, commander of Regimental Combat Team 1, as Marines raced toward Baghdad in March 2003. Mattis does not name Dowdy in the book, but mentions his decision to relieve him of his post — a vanishingly rare occurrence on the battlefield — as he grew frustrated with Dowdy's unwillingness to assume more risk for his men in order to accelerate the pace.

Mattis doesn't express regret for doing this, but calls him a “noble and capable officer” who had performed superbly in the past and had “heartfelt reluctance” about doing what Mattis asked of him. “You cannot order someone to abandon a spiritual burden they're wrestling with,” Mattis writes.

7. Mattis sometimes got in trouble for his blunt statements, but he didn't mind

Mattis voices pride in having never apologized for his most notorious “Mattisisms” — such as, “It's fun to shoot some people” — but does acknowledge that his words sometimes created a media firestorm or earned him reproval from higher-ups.

But particularly in dealings with “cunning Iraqi politicians” and other suspect actors, he prized bluntness and rejected euphemisms. “Language is a weapon,” he writes.

Mattis spent three years at CENTCOM and said the U.S. policy decisions during that time only made the turmoil in the region worse. He expresses dismay at the Obama administration's insistence on pulling out of Iraq — “like watching a car wreck in slow motion” — and laments that his military advice on the matter fell on deaf ears.

But Mattis saved his sternest rebukes for his depiction of Obama's decision not to strike back at Syrian dictator Bashar al-Assad, a choice that he says still haunts us today in the form of bolder enemies and more timid allies. “It was a shot not heard around the world,” he writes.

9. That said, Mattis refused to accept criticism of the president from foreign leaders

He did not even allow silence to signal his agreement with criticism of the administration, he wrote, and would speak out to make clear that his loyalty to his president was “absolute.”

That continued, he noted, until he received an “unauthorized phone call” in December 2012 tipping him off to the fact that he was being removed from his post.

As CENTCOM commander, he said he frequently didn't know what he was expected to accomplish, and lamented the disarray he left behind, but maintains he carried out every order to the best of his ability.

10. As SecDef, his focus on lethality was about the troops and the fallen

Call Sign Chaos is very short on any description of or discussion about his time spent as defense secretary from January 2017 to the end of 2018. But he does riff on his push to emphasize lethality in every aspect of operations at the Pentagon.

He also makes oblique reference to some of the social issues he dealt with during his tenure, including executing a Trump directive on barring most transgender individuals from military service, and comments about his continued uncertainty regarding women serving in combat.

Those in civilian oversight roles, he wrote, “must show reserve in directing social changes” and not view the military as a “petri dish” for social experimentation. Focusing everything on lethality, he wrote, was a way to minimize casualties on the battlefield and deter the enemy.

“When I meet with Gold Star families, I feel that all the fallen were my sons and daughters,” Mattis writes. “They deserve more than 'Thank you for your service.'”