Climate scientists in the federal government have been on the defensive since President Donald Trump took office in January. But... 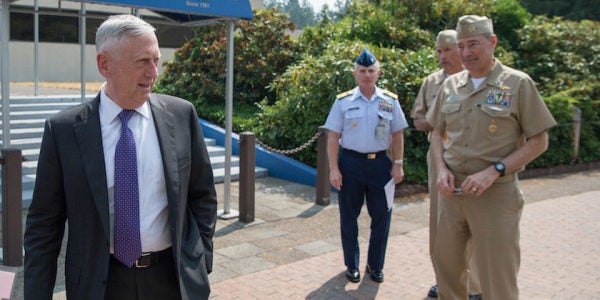 Climate scientists in the federal government have been on the defensive since President Donald Trump took office in January. But military leaders will continue to address the risks that climate change poses to bases and national security, a senior Pentagon official said at a conference on Oct. 27 on sea level rise.

Maureen Sullivan, a Department of Defense deputy assistant secretary who oversees environmental issues, indicated Secretary of Defense James Mattis has set that tone from day one of the Trump administration.

The Senate confirmed Mattis by 98-1 on the day Trump was inaugurated. Though it was apparent Mattis would breeze through, his senior aides still combed the written answers that Pentagon officials helped craft in response to senators’ written questions.

Sullivan said they didn’t like the “wishy-washy” words on climate change that her staffers submitted.

“They came back to us and said: ‘These are too weak. Secretary Mattis believes in climate change and the risk to national security. You need to make those stronger.’ ”

Within the government, Sullivan said, “a changing climate” is replacing “climate change” as the term de rigueur. No matter what it’s called, she said: “The fundamentals stay the same. The same general policy is that this is a risk that we need to integrate in day-to-day decision-making.”

It didn’t take long for presenters to make the case for why climate change and sea level rise threaten military readiness.

Shana Udvardy, a climate preparedness specialist with the Union of Concerned Scientists, ticked through the highlights of some of her group’s recent reports on the threats to coastal bases. If global sea levels rise by 3.7 feet this century, as the union has forecast, more than half of Naval Air Station Oceana and its Dam Neck Annex will be underwater every day in 2100. The base stands to lose more than 10 percent of its land mass to constant flooding in just the next 35 years, according to the group.

Related: How Pulling Out Of The Paris Climate Change Agreement May Screw The US Military »

Joint Base Langley-Eustis would suffer large land losses as well, the group says.

Some conference speakers decried Trump’s move to withdraw the United States from the Paris climate accord, saying the international agreement to reduce carbon emissions offers the clearest roadmap for slowing the global warming that’s causing ice to melt and seas to rise.

Udvardy said she found some encouragement in a vote by the Republican-controlled House in June. It approved an amendment to a military spending bill that requires the defense secretary to address climate change in numerous ways, including by compiling a list of the most vulnerable installations and proposing strategies for protecting them.

The amendment still must be accepted by House and Senate conferees before it becomes part of a final bill.