Defense Secretary Jim Mattis delivered a blunt warning to NATO allies Wednesday that the U.S. could “moderate its commitment” to... 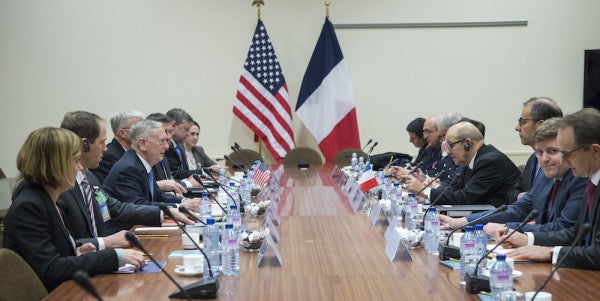 Defense Secretary Jim Mattis delivered a blunt warning to NATO allies Wednesday that the U.S. could “moderate its commitment” to the alliance should European members not establish a plan by year’s end to carry a larger share of the security burden.

“America will meet its responsibilities, but if your nations do not want to see America moderate its commitment to this alliance, each of your capitals needs to show support for our common defense,” Mattis said in a statement delivered to members of the 28-nation military pact.

The warning came on Mattis’ first visit as Pentagon chief to NATO’s headquarters in Brussels, where, in response, allies emphasized the need to accelerate efforts to increase their own defense expenditures.

In 2017, NATO must adopt a plan that sets milestone dates toward spending levels member states have already agreed to: dedicating 2 percent of gross domestic product on defense, Mattis said. Only five NATO state — the U.S., Estonia, Poland, Greece and the United Kingdom — currently meet that benchmark.

“No longer can the American taxpayer carry a disproportionate share of the defense of Western values. Americans cannot care more for your children’s future security than you do,” Mattis said. “Disregard for military readiness demonstrates a lack of respect for ourselves, for the alliance, and for the freedoms we inherited which are now clearly threatened.”

The allies have been under heavy pressure from the new U.S. administration to boost defense spending. The failure of many European allies to spend 2 percent of their gross domestic product on military matters — a NATO benchmark — has emerged as a point of contention for President Donald Trump.

Mattis’ “firm message to all allies” was well received by members behind closed doors, with ministers saying they are “ready now to step up,” Stoltenberg said.

On Wednesday, Latvia, Lithuania and Romania — beneficiaries of an increased U.S. military presence in Europe — pledged they will be at 2 percent GDP spending levels “very soon,” Stoltenberg said.

“I owe it to you to give you clarity on the political reality in the United States, and to state the fair demand from my country’s people in concrete terms,” Mattis said.

Mattis, in a brief statement Wednesday, called NATO a “fundamental bedrock for the United States,” offering comments aimed at reassuring some allies who have grown concerned about Trump’s stated desire for closer cooperation with Russia.

During the past two years, the U.S. has intensified operations in Europe, rotating more soldiers into the Baltics as part of an effort to deter Russian aggression and sending hundreds of tanks and other fighting vehicles back to Europe. The effort has cost the U.S. several billion dollars. In light of Mattis’ comments in Brussels, the future of those efforts could now be viewed contingent upon allies contributing more to the collective security burden.

Stoltenberg highlighted progress as allies attempt to reverse many years of defense spending decline. In 2016, NATO members increased their overall defense spending by about 3.8 percent, or $10 billion.

“It is a fair demand that all who benefit from the best defense in the world carry their proportionate share of the necessary cost to defend freedom,” Mattis said. “We should never forget it is ultimately freedom that we defend here at NATO.”

Stoltenberg said he is convinced “the United States will stay committed to the trans-Atlantic partnership.”

Meanwhile, NATO will set up a new anti-terrorism hub in Naples, Italy, which will serve as a focal point for monitoring threats growing along the alliance’s southern doorstep, NATO’s top official said.

“This will help us to coordinate information on crisis countries such as Libya and Iraq, and help us address terrorism and other challenges stemming from the region,” Stoltenberg said at the start of two days of talks with NATO defense ministers.

The plan is part of an effort by NATO to strengthen its role in combating terrorism, a key area of concern for Trump, who has criticized allies for not doing enough against such threats.

“We Germans and most Europeans have left our security too long on the broad shoulders of our American friends,” German Defense Minister Ursula von der Leyen said in an opinion story in the Sueddeutsche Zeitung daily. “And yes, we know we have to bear a larger, a fairer part of the burdens for the common Atlantic security.”

The meeting of NATO defense ministers is the first since Trump’s election and comes as Russia appears to be testing the new administration, whose team is now in flux with the sudden resignation Monday of national security adviser Mike Flynn.

Several Russian aircraft buzzed a U.S. destroyer on Friday in the Black Sea, maneuvers that were deemed “unsafe and unprofessional” by the ship’s commander, according to U.S. European Command.

Reports also have emerged that Russia has deployed a new cruise missile system that would amount to a violation of a treaty that bans land-based intermediate-range missiles.

Stoltenberg declined to comment on the reported deployment, calling it an intelligence matter. However, he said any such missile system would pose a threat to Europe.

“The Department of Defense has made very clear our concerns about Russia’s violation, the risks it poses to European and Asian security, and our strong interest in Russia returning to compliance with the treaty,” said Lt. Col. Michelle L. Baldanza, a Pentagon spokeswoman. “We support a review of Russia’s ongoing INF Treaty violation in order to assess the potential security implications for the United States and its allies and partners.”

Russia has denied it violated the treaty. Kremlin spokesman Dmitry Peskov said Wednesday that Moscow continues to honor the 1987 accord that bans land-based systems.

“Nobody officially accused Russia of violating the INF treaty,” said Peskov, as quoted by the Russian news agency Sputnik. “Of course Russia was and remains committed to its international obligations, including in the framework of the agreement.”

On Thursday, Secretary of State Rex Tillerson and Gen. Joseph Dunford, chairman of the Joint Chiefs of Staff, are scheduled to meet with their Russian counterparts in Baku, Azerbaijan, where the issue is likely to come up.