Defense Secretary Jim Mattis and military leaders from across NATO will consider command structure reforms to enable the more rapid... 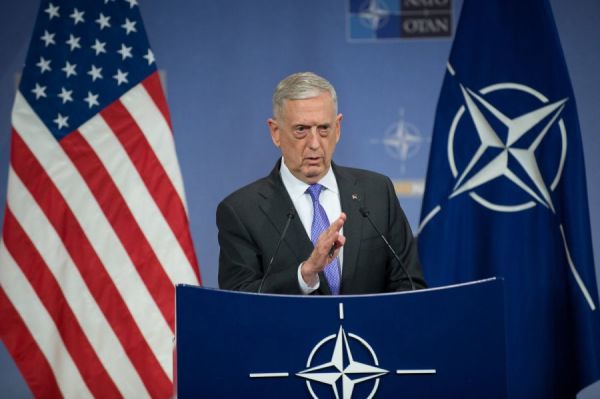 Defense Secretary Jim Mattis and military leaders from across NATO will consider command structure reforms to enable the more rapid deployment of forces in Europe when allies meet in Brussels next month.

Measures under review include establishing two new headquarters — one focused on securing transit routes by sea and another to deal with guarding supply lines across land in Europe, according to an internal NATO report obtained by the German magazine Der Spiegel.

“Fast-evolving security challenges mean new demands on our command,” Lungescu said. “So work is underway to ensure that the NATO command structure remains robust, agile and fit for purpose.

NATO declined to comment on what was detailed in the Der Spiegel report, which outlined specific reforms under review. However, command and control issues will be on the agenda when defense ministers convene Nov. 8 and 9 in Brussels, NATO said.

“NATO is making progress in all these areas but we are not complacent. We are focused on military mobility as a matter of priority,” Lungescu said.

NATO’s moves are in response to concerns about a more aggressive Russia. Still, military officials have acknowledged the odds of direct confrontation between NATO and Moscow are remote.

For the past three years, U.S. Army Europe boss Lt. Gen. Ben Hodges has repeatedly called for allies to establish a military zone that would enable convoys to cross national borders freely during peacetime. Often, U.S. forces on convoy get delayed by varying customs rules that they must comply with as they move between countries.

Such barriers could theoretically be lifted or ignored during wartime, but in a developing crisis militaries would likely need to mobilize under peacetime conditions.

“Anybody that thinks, ‘Don’t worry, we’ll be able to drive anywhere’ — not true,” Hodges recently said. “Anybody who thinks you’ll be able to fly anywhere at night — not true. Everything we do prior to declaration of Article 5 is going to be done in peacetime conditions.”

Article 5 is NATO’s collective defense provision, which states an attack on one member requires a response from all.

“The ability to deploy forces quickly across the alliance is important for NATO’s collective defense,” Lungescu said.

Allies see a beefed-up presence in Eastern Europe as a deterrence to possible Russian aggression. Moscow has called NATO’s efforts a provocation.

One of the new NATO commands under consideration would be U.S.-based, focused on maritime challenge and modeled after the Cold War-era Supreme Allied Command, according to Der Spiegel, drawing on the internal NATO memo. It would deal with the safe passage of soldiers and supplies to Europe.

The second new command would manage and safeguard supply lines on the Continent. Germany and Poland are possible locations for the headquarters, Der Spiegel said.

“NATO’s ability to logistically support rapid reinforcement in the much-expanded territory covering SACEUR’s (Supreme Allied Commander Europe) area of operation has been atrophied since the end of the Cold War,” the report said.

As NATO works on new command and control capabilities, it will evaluate infrastructure in Eastern Europe. This would be consistent with efforts by U.S. European Command and USAREUR during the past two years to chart bridge and rail networks in the Baltics and Poland.

“NATO is gathering more information on infrastructure, such as the weight that roads, bridges and runways can carry,” a NATO official said, speaking under customary anonymity. “We are also looking at making sure air, rail and sea lift is readily available and in sufficient numbers.”