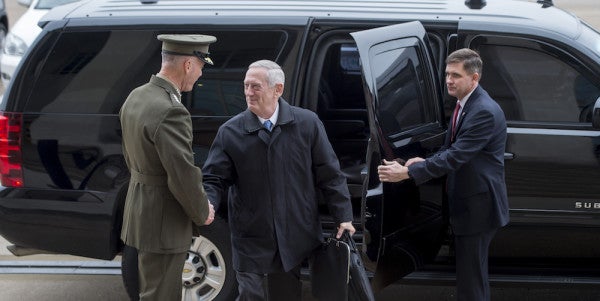 “I go by Jim,” new Defense Secretary James Mattis said Thursday in good-naturedly shrugging off the “Mad Dog” moniker President Donald Trump delights in using to refer to him.

“It’s you guys that came up with Mad Dog,” the retired Marine general told reporters. “My own troops were laughing about it, saying, ‘We know your call sign is Chaos, where did this come from?’ It must have been a slow news day; some newsperson made it up.”

“I go by Jim. I was born Jim. I am from the West. Jim is fine, OK? How’s that? And that’s on the record,” Mattis said, according to the Washington Examiner.

Mattis went off the record as he made a surprise appearance Thursday at the usual “gaggle” for Pentagon reporters run by Navy Capt. Jeff Davis, the Pentagon spokesman, on the day’s events, but he came back on the record to deal with the “Mad Dog” nickname.