Did Mattis Fire A Guantanamo War Court Overseer For Getting Soft On The 9/11 And USS Cole Cases?

The overseer of the Guantanamo war court who was fired without explanation told the 9/11 trial judge in an affidavit... 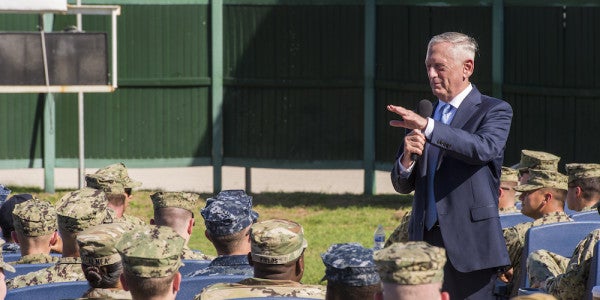 The overseer of the Guantanamo war court who was fired without explanation told the 9/11 trial judge in an affidavit obtained by the Miami Herald that he was considering plea deals in the terror case and took a number of other actions.

Mattis, in his own sworn filing with the 9/11 judge, denies he was influenced by any “judicial or quasi-judicial acts” by the man he appointed to the post 10 months earlier but never met. He instead blamed a late-January episode when Rishikof tried to obtain new aerial photography of the war court site by going outside proper channels. Mattis also cited Rishikof’s overall management style.

Related: He Became A SEAL To Fight Terrorists. Now He’s A Navy Lawyer Defending An Accused One »

In a joint March 19 unclassified filing, which has yet to be released by the Department of Defense (DOD), Rishikof and legal adviser Gary Brown describe their dismissals as a surprise and their tenure this way:

“Some of the decisions and courses of action undertaken during our tenures as Convening Authority and Legal Advisor concerned conspiracy charges, capital charges, guilty pleas in the 9/11 and USS Cole cases, conditions of detention relating to military commissions, recommendations for the reorganization of DOD’s prosecutorial and security process to provide for a unity of command to avoid potential ethical conflicts, review of contempt charges, and adequate funding of the defense.”

They add: “It is unknown to us if the decisions and recommendations in these cases played a role in our removal.”

The Herald obtained the four-page document along with two declarations provided by Mattis and acting Pentagon General Counsel William Castle. The documents have yet to be posted on the Pentagon’s war court website because they are undergoing a security review to determine which portions the public will be allowed to see, according to war court spokeswoman Navy Cmdr. Sarah Higgins.

Defense lawyers in the Sept. 11 terrorism trial have asked the judge, Army Col. James L. Pohl, to dismiss the case over the firings, which they allege constitute unlawful influence over the independence of the convening authority. In response, Pohl ordered Mattis and Castle to explain why they fired Rishikof and Brown, and asked the men who were fired to submit declarations as well.

Mattis and Castle describe an effort by Rishikof, a civilian, to obtain fresh aerial imagery of the war court compound at Guantanamo as the ultimate reason for his dismissal. They write that Rishikof disregarded the military chain of command by tasking the U.S. Coast Guard with conducting a flyover of the site — after being rebuffed in an earlier effort to have the photography done by a “Combatant Command,” likely the U.S. Southern Command, which has oversight of the detention center there of 41 captives and its 1,700 military-civilian staff.

As Mattis and Castle tell it, the military provided 2014 imagery during the week of Jan. 22. So the Convening Authority went directly to the Coast Guard to request the flyover, resulting in the dismissal within two weeks. “The military commissions require a unity of effort that in turn depends on appropriate coordination,” Castle wrote in his eight-page affidavit.

Mattis said he “did not initiate the action” to fire Rishikof and instead acted on Castle’s legal advice, dated Feb. 3, two days before the firings. “I considered Mr. Rishikof’s management/corporate decision making, professional judgment and temperament,” Mattis said in his three-page sworn statement. “I did not consider Mr. Rishikof’s performance of any judicial or quasi-judicial acts.”

Rishikof and Brown made no mention of the overflight episode in their joint filing.

Defense attorneys in both cases have said that the Pentagon would have to eliminate the death penalty as a possibility for there to be guilty pleas; some have gone further, saying any plea agreements would also require an eventual release from U.S. military detention. The possibility of pleas has enraged some families of victims of the al-Qaida attacks, who deem the death penalty as the only appropriate punishment. Some prosecutors have been likewise upset by the possibility of ongoing plea negotiations.

David Nevin, the lead attorney for the alleged 9/11 plot architect, Khalid Sheik Mohammed, would not discuss specifics in the filings but described them on Thursday as inadequate.

He said Mattis and Castle’s affidavits “raise more questions than they answer. And they run contrary to experience. I believe more information is necessary to get to the bottom of this.”

But Rishikof and Brown write that they never met with Mattis, who appointed Rishikof on April 4; that they had never heard complaints about their performance from the Pentagon’s Office of the General Counsel; and that they suspected the “draconian action” of their firings “could be driven by the wishes of subordinate offices or outside interveners with little responsibility for the actual operation of military commissions.”

They provided their declaration to the court unaware of the explanation provided by Mattis and Castle and asked the 9/11 judge to let them see it and respond. It was not known this week if that happened; Rishikof has consistently declined to respond to questions from the Herald.

In a strange wrinkle, Rishikof and Brown note in their filing that they were fired on Feb. 5 — after they were summoned to Castle’s office, handed a dismissal notice and stripped of their Top Secret clearances — only to learn that two days earlier Mattis named Jim Coyne, the general counsel at the Defense Logistics Agency program, as acting Convening Authority for Military Commissions, meaning two men simultaneously held identical, sweeping authorities that weekend.

“Our goal has always been to find a fair and just resolution to Commissions cases so the victim family members may finally have closure,” Rishikof and Brown wrote. They warn their firing could “undermine the ability of officials in these positions in the future to be expected to give fair, impartial, independent and sound advice while understanding that any decision regarding a case could result in immediate termination of employment, suspension of credentials, and being escorted from the facility without advance discussion or notice.”