Mattis Had The Perfect Response When Asked About Bombing Iraqi Civilians 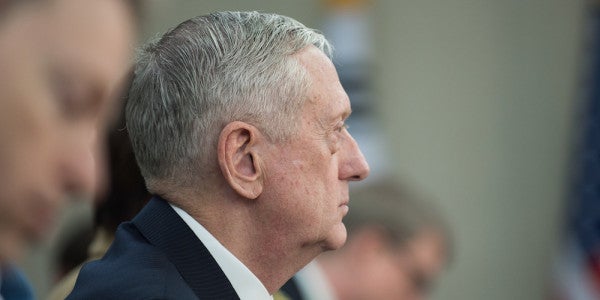 Recent reports out of ISIS's final Iraqi stronghold, Mosul, indicate at least 100 civilians died in airstrikes almost certainly carried out by the US-led coalition's air campaign against the terror group.

While the Pentagon has denied loosening its rules of engagement, an Associated Press report last month quoted a spokesman for the coalition, Air Force Col. John Dorrian, as saying US operators no longer needed to clear airstrikes with a Baghdad office, empowering coalition forces to more easily call in airstrikes.

Business Insider reported that although the rules of engagement had not changed, procedures leading up to strikes had, so any coalition forces on the ground had a freer hand to call in airstrikes.

This adjustment in tactics seems to have had grave results.

“Eyewitnesses from Mosul and Iraqi officials have said last week's strike on Islamic State targets may have collapsed homes where rescue officials say as many as 200 people were buried in the rubble,” Reuters reported.

Amnesty International gathered local reports of scores more civilians being killed in their homes after being told by Iraqi officials not to flee. It called the situation a “flagrant violation of international humanitarian law.”

But when confronted with mounting evidence about the troubling trend, US Defense Secretary Jim Mattis did not deny or demure — he gave a circumspect response.

“There is no military force in the world that has proven more sensitive to civilian casualties,” Mattis told Reuters reporters. “We go out of our way to always do everything humanly possible to reduce the loss of life or injury among innocent people. The same cannot be said for our adversaries.”

Mattis' statement stands up to initial scrutiny. The US almost exclusively uses precision guided munitions, which can greatly reduce civilian casualties when coupled with accurate intelligence.

Compare that with cluster munitions, barrel bombs, and tons of unguided gravity bombs dropped haphazardly from miles above ground by Russia and Syria.

Compare the US's swift admission to airstrikes in ISIS-held Iraq that killed dozens of civilians with a Russian general claiming in March 2016 that “not a single bombing raid missed the target,” at a time when Russian warplanes supporting the Syrian regime had been linked to bombing hospitals.

Writing for Duke University's Lawfire blog, retired US Air Force Maj. Gen. Charles Dunlap Jr. said, “The grim truth is that given ISIS tactics, civilians will die in the effort to crush the terrorists.”

In Syria, the majority of Russia's airstrikes weren't even close to ISIS territory.Chart via Institute for the Study of War

For this reason, Dunlap says we must accept the sad truth and expect more civilians to die as a result of the campaign against ISIS.

But also expect the US to be more accountable than any other nation when it comes to reconciling and making reparations for civilian victims of US strikes against ISIS.

Reuters reported that the Pentagon would review 700 hours of footage taken over 10 days to determine if and when mistakes were made.