Mattis On ISIS leader Baghdadi: ‘Until I See His Body, I Am Going To Assume He Is Alive’

Amid ISIS' defeat in the Iraqi city of Mosul and ongoing fighting in its self-declared capital in Raqqa, Syria, the... 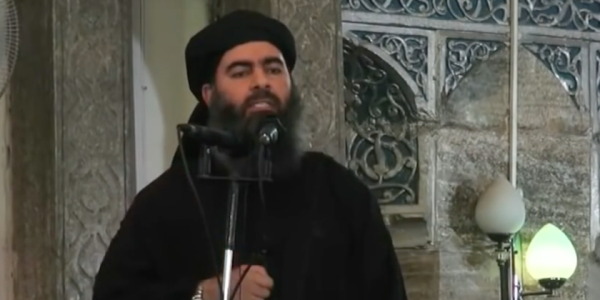 Amid ISIS' defeat in the Iraqi city of Mosul and ongoing fighting in its self-declared capital in Raqqa, Syria, the fate of its leader, Abu Bakr al-Baghdadi, remains unknown.

Russia said in late June that it believed he had been killed in a bombing raid on Raqqa, but earlier this week Moscow admitted that it was unable to confirm the death and said it was getting contradictory information.

Despite an observer group saying Baghdadi has been killed, Defense Secretary James Mattis and other US commanders are skeptical.

“I think Baghdadi’s alive,” Mattis told reporters at the Pentagon on Friday, according to Military Times. Mattis has made similar statements before, and he told reporters that absent evidence Baghdadi was still commanding ISIS, it was possible he was acting in a religious or propaganda role for the terrorist group.

“Until I see his body, I am going to assume he is alive,” Mattis said. The US intelligence community has also seen no evidence Baghdadi is dead.

Army Lt. Gen. Stephen Townsend, the leader of the US-led coalition fighting ISIS in Iraq and Syria, hasn't confirmed the death either, but earlier this week he said he had no “reason to believe he's alive. I don't have proof of life.”

While Baghdadi's whereabouts remain unclear, the group he led appears to be on the wane. Iraqi forces have recaptured Mosul — after ISIS fighters there destroyed the mosque where Baghdadi declared ISIS' “caliphate” in summer 2014 — and US-backed fighters have advanced into Raqqa, though much hard fighting remains there.

Like Baghdadi's fate, who will succeed him is also unclear. Experts believe that two lieutenants, ISIS war minister Iyad al-Obaidi and the group's security agency chief, Ayad al-Jumaili, are the most likely candidates. Both served in the Iraqi army under Saddam Hussein and then joined the Sunni Salafist insurgency in Iraq in 2003, after Hussein was deposed by the US invasion.

Leadership questions aside, the group looks to remain present in some form. In June, US officials were quick to note that ISIS remained a threat in both Iraq and Syria after Iraqi Prime Minister Haider al-Abadi announced the group was at its end. And even with ISIS eroding, the tensions that fostered or accompanied its rise and other drivers of conflict are likely to endure.