Editor’s Note: This article by Brendan McGarryoriginally appeared on Military.com, the premier source of information for the military and veteran... 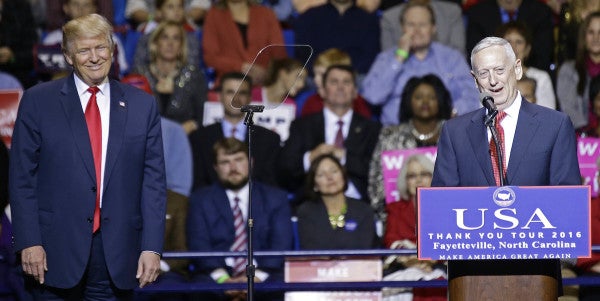 Editor’s Note: This article by Brendan McGarryoriginally appeared on Military.com, the premier source of information for the military and veteran community.

The event took place before an enthusiastic crowd in Fayetteville, North Carolina, just miles from the Army's Fort Bragg, the service's largest base with more than 50,000 soldiers and home to airborne and special operations forces, according to the Defense Department.

After arriving more than an hour late due to the rainy weather, Trump praised Mattis as one of the most effective U.S. military leaders in decades “who plays no games.” Trump introduced the general by his nickname, “Mad Dog,” when he called him to the stage.

Mattis spoke briefly — less than a minute — in his first public statement as the nominee.

“Thank you president-elect for the confidence you have shown in me,” he said. “Thank you for the opportunity — I'm grateful for the opportunity to return to our troops, their families, the civilians at the Department of Defense because I know how committed they are and devoted they are to the defense of our country, the defense of our constitution.

“With our allies strengthened, with our country strengthened, I look forward to being the civilian leader so long as the Congress gives me the waiver and the Senate votes to consent,” he added. “Thank you very much.”

Under current law, Mattis would need a waiver from Congress to get past the rule barring military officers from taking posts requiring Senate confirmation for seven years after retiring. Mattis stepped down as head of U.S. Central Command in 2013.

Before the event, Dan Senor, senior adviser to the Mitt Romney-Paul Ryan campaign in 2012, said he found Trump's selection of Mattis “reassuring.”

“I find this reassuring,” he told CNN. “We should all be encouraging the Senate to grant this waiver because we want competent, serious people to serve in this administration.”

Sen. John McCain, a Republican from Arizona and chairman of the Senate Armed Services Committee, which will oversee the confirmation, has said he supports Mattis but that the process for approving a waiver won't be easy.

“I'm very worried about it,” he said, The Washington Examiner reported on Tuesday. “We have to work on it.”

Democrats including Sen. Kirsten Gillibrand, a Democrat from New York, have said they will oppose granting Mattis a waiver.

Related: Some Call This Mattis’ One Mistake In Battle — A Legendary Marine Says Otherwise »

“While I deeply respect General Mattis’s service, I will oppose a waiver,” she said in a statement last week. “Civilian control of our military is a fundamental principle of American democracy, and I will not vote for an exception to this rule.”

Trump had already said he intended to nominate Mattis for the top job at the Defense Department, an announcement that came last week and earlier than planned after The Washington Post broke the news.

During his speech on Tuesday night, Trump repeated his campaign pledges to rebuild the military in part by increasing the size of the armed forces and to reform the Veterans Affairs Department in part by ensuring that vets can seek treatment from a private care provider of their choice if they face too long of a wait for an appointment at a VA facility.