Mattis To Lawmakers: Another Shutdown Will Have ‘Terrible Ramifications’ For Military 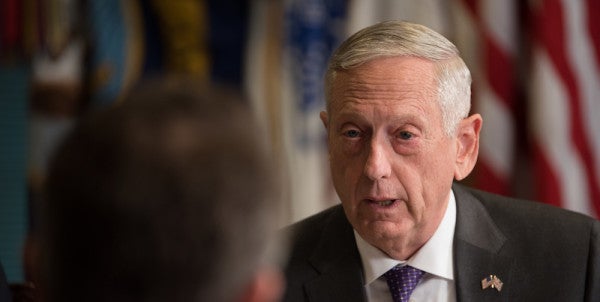 As lawmakers clambered to strike a deal to keep the government open past Thursday, when funding is set to expire, Mattis warned another year operating under continuing resolutions would have far-reaching consequences – potentially even hampering military pay.

“For too long we have asked our military to carry on stoically with a success at any cost attitude,” Mattis told the House Armed Services Committee. “Our troops work tirelessly to accomplish every mission with increasingly inadequate and misaligned resources simply because Congress has not maintained regular order.”

The retired 4-star Marine general warned troops might not be paid by the end of the current fiscal year, which ends Sept. 30, if Congress continued to pass continuing resolutions without a proper Defense Department budget. That would also hinder Army efforts to recruit 15,000 new soldiers, the Air Force’s goals of adding 4,000 airmen and it would mean continued maintenance issues on ships and aircraft, he said.

Mattis’ warning comes after an especially troubling 2017 that saw an uptick in high-profile deadly incidents outside of combat zones. Aviation mishaps increased by 38 percent from 2016, with 22 reported crashes in non-combat situations. Included among those crashes were 37 troop deaths. Another 17 servicemembers – all Navy sailors – were killed in two rare, at-sea collisions between merchant ships and the USS John S. McCain and the USS Fitzgerald, two U.S. guided-missile destroyers.

Meanwhile, Russia and China have been investing heavily in their own military forces, including their nuclear weapons, putting a significant dent in the U.S. military’s advantage in battlefield capabilities, should it ever be drawn into conflict with those powers. That re-emergence in “great power competition” is at the center of the two documents – the National Defense Strategy and the Nuclear Posture Review — that Mattis and Air Force Gen. Paul Selva, the vice chairman of the Joint Chiefs of Staff, were called to Capitol Hill to discuss Tuesday.

Those strategies each call for increased funding to boost the size of the U.S. military and expand its training, but also to modernize infrastructure and conventional and nuclear weapons systems. Such investment, Mattis argued, is necessary to deter Russia, China, North Korea or Iran from miscalculating America’s military strength and starting a fight.

House lawmakers were expected to pass a continuing resolution later Tuesday that would keep the government funded through March 23 while also providing $659 billion to the Pentagon for the remainder of fiscal year 2018. That measure, however, was not expected to survive the Senate, where Democratic leaders have demanded increased domestic spending to match any hikes in defense appropriations.

The votes on the new short-term funding proposal are just weeks after lawmakers failed to reach an agreement Jan. 19, kicking off a three-day partial government shutdown. That shutdown resulted in missed training for thousands of National Guardsmen and reservists and forced furloughs on thousands more Defense Department civilians.

Mattis said another such shutdown would have “terrible ramifications” for the military.

House Republicans’ proposed funding would allow the Pentagon to achieve its goals for the remainder of the year, Mattis told the House committee’s Republican chairman, Rep. Mac Thornberry of Texas.

Thornberry and the committee’s top Democrat, Rep. Adam Smith of Washington echoed Mattis’ comments, encouraging their colleagues to find a way to fund the Defense Department.

“It is morally wrong to send brave men and women out on missions under any strategy for which they are not fully trained, equipped and supported with the best that this country can provide,” Thornberry said. “That support should not be conditioned on any other issue. And we can never forget that there is a real, human cost to failing to fully support them.”

Smith added the United States cannot continue to operate on “wasteful continuing resolutions” and pushed lawmakers to find a way to eliminate sequestration and the mandatory budget caps imposed by the Budget Control Act of 2011.

“I worry that will wind up costing the men and women who serve … the training and the equipment they need to carry out the missions that we all hear that we need,” he said, while also admonishing President Donald Trump’s requested $4.1 trillion federal budget alongside the recently passed $2 trillion tax cut.