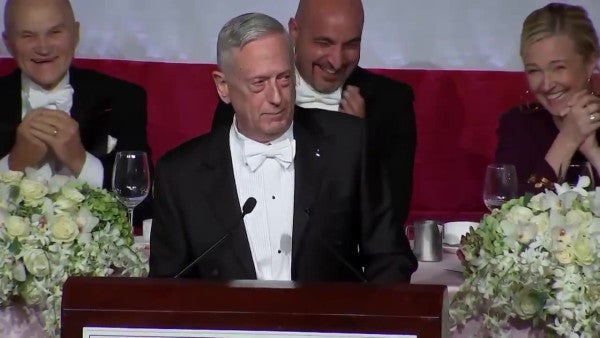 “I'm not just an overrated general, I am the greatest — the world's most — overrated,” Mattis said at the event, which raises money for charity.

“I'm honored to be considered that by Donald Trump because he also called Meryl Streep an overrated actress,” Mattis said. “So I guess I'm the Meryl Streep of generals … and frankly that sounds pretty good to me. And you do have to admit that between me and Meryl, at least we've had some victories.”

In 2017, Trump famously called Streep, a three-time Oscar winner and Summit native who grew up in Bernardsville, “one of the most over-rated actresses in Hollywood” in a tweet. His remark arrived after Streep criticized him at the Golden Globes before he was sworn in as president.

On Wednesday, Trump reportedly called Mattis “the world's most overrated general” during a meeting at the White House after Senate Minority Leader Chuck Schumer, D-N.Y., referenced a Mattis quote at the meeting: “if we don't keep the pressure on, then ISIS will resurge. It's absolutely a given that they will come back.”

Schumer said that Trump claimed to be “better at this than Mattis.”

Mattis resigned from his defense secretary post in December after Trump decided to withdraw troops from Syria.

Mattis, a retired four-star Marine general, didn't stop there, roasting Trump for the bone spurs that kept him from serving in the Vietnam War.

“I've earned my spurs on the battlefield, Martin, as you pointed out,” Mattis said, “and Donald Trump earned his spurs in a letter from a doctor.”

“I think the only person in the military that Mr. Trump doesn't think is overrated is who you pointed out, Martin,” he continued. “That's Col. Sanders.”