Secretary of Defense James Mattis hinted that the United States still had military options left for dealing with North Korea,... 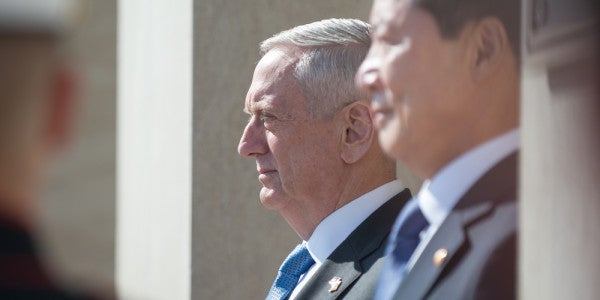 Secretary of Defense James Mattis hinted that the United States still had military options left for dealing with North Korea, but did not elaborate when asked for details Sept. 18.

Most experts believe that a military strike on North Korea would invite a devastating response from Pyongyang. The city of Seoul, South Korea, home to 25 million, is well within artillery range of the North, which would likely use conventional artillery munitions and chemical weapons.

But, according to Mattis, the Pentagon has a few tricks up its sleeve that wouldn't involve the decimation of Seoul.

When asked, “is there any military option the U.S. can take with North Korea that would not put Seoul at grave risk?” on Monday, Mattis responded, “Yes, there are, but I will not go into details.”

Previously, Mattis said a war with North Korea would “involve the massive shelling of an ally's capital, which is one of the most densely packed cities on earth,” in reference to Seoul.

It's difficult to understand what the Pentagon could do to stop a North Korean nuclear program or take out its leader Kim Jong-un, while preventing Pyongyang from fighting back. Artillery, rockets, missiles, and other munitions are scattered throughout the North — many in secret locations — and the Kim regime maintains an ironclad hold on power.

And with every known military option — from launching Tomahawk cruise missiles to air strikes — its likely that North Korea would interpret any strike, however limited, “as a prelude to invading or overthrowing the government, even if the United States insists otherwise,” Daryl Press, a scholar of nuclear deterrence at Dartmouth College, told The Atlantic.

So what does Mattis have in mind? He wouldn't say, but he did let slip one interesting comment.

“Just to clarify, you said that there were possible military options that would not create a grave risk to Seoul. Are we talking kinetic options as well?” a reporter asked in a follow-up.

“Yes, I don't want to go into that,” Mattis said, agreeing that his closely-held military option involved kinetic action, a euphemism to describe lethal military force.

President Donald Trump threatened to “totally destroy North Korea” in a speech to the United Nations on Sept. 19.

“It is an outrage that some nations would not only trade with such a regime, but arm, supply, and financially support a country that imperils the world with nuclear conflict,” Trump said, adding that if Pyongyang didn't back down, the U.S. would “have no choice than to totally destroy North Korea.”