Mattis To Military: ‘Be Ready’ For What Trump Decides To Do About North Korea

Defense Secretary Jim Mattis told the annual convention of the Association of the US Army on Monday that they should... 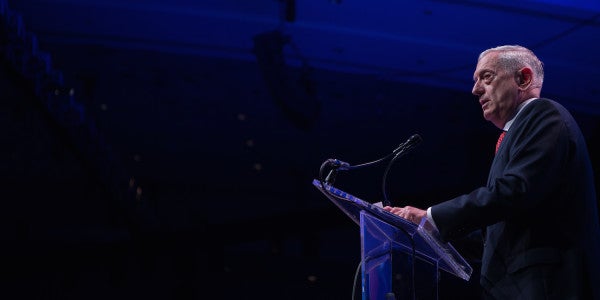 Defense Secretary Jim Mattis told the annual convention of the Association of the US Army on Monday that they should “be ready” with military options should diplomacy fail with North Korea.

When asked what the US military could do to make war with North Korea less likely, Mattis didn't sugarcoat it or offer false hope.

“There's one thing the US Army can do, and that is, you have got to be ready to ensure that we have military options that our president can employ, if needed,” said Mattis.

Mattis said the US is currently pursuing a “diplomatically led effort” that has seen the UN Security Council twice vote unanimously to sanction North Korea, but that military backing is still needed.

Defense Secretary Jim Mattis told the annual convention of the Association of the US Army on Monday that they should “be ready” with military options should diplomacy fail with North Korea.Photo via KCNA/Associated Press

“The international community has spoken, but that means the US Army must stand ready,” Mattis said.

While Mattis told the troops to stand ready, President Donald Trump tweeted that “policy didn't work” with North Korea, reiterating his assertions that diplomacy has failed time and time again under various presidents.

But US Army Chief of Staff Gen. Mark Milley put the threat of war in perspective during a press conference on the sidelines of the US Army convention, saying there are “no risk-free options” in dealing with North Korea.

“It would be horrible, there's no question about it,” Milley said of a war with North Korea. “But so would an intercontinental ballistic missile striking Los Angeles or New York City. That would be equally horrible,” Milley said, according to CNN.

“There is a timeline on this” Milley said, acknowledging that North Korea's missile threat has rapidly progressed and will likely soon progress to the point where even Washington DC is within range.

“It's not an indefinite amount of time. And there will be decisions made, there's no question about it.”

North Korean leader Kim Jong Un inspects the defence detachment on Jangjae Islet and the Hero Defence Detachment on Mu Islet located in the southernmost part of the waters off the southwest front, in this undated photo released by North Korea's Korean Central News Agency (KCNA) on May 5, 2017.Photo via KCNA/Business Insider

Milley made it clear that although the military stands ready to fight even a horrific fight, it's up to the commander in chief to decide when and if they fight.

Though Trump often threatens force, he has remained vague about what he'll actually do.

On Thursday evening, during an impromptu dinner with senior military officials at the White House, Trump suggested the meeting may represent “the calm before the storm.”