Mattis To Sailors: ‘You’re Not Some P—y Sitting On The Sidelines’

Secretary of Defense James Mattis is well known for having delivered some controversial quotes in the past, and he uttered yet another during... 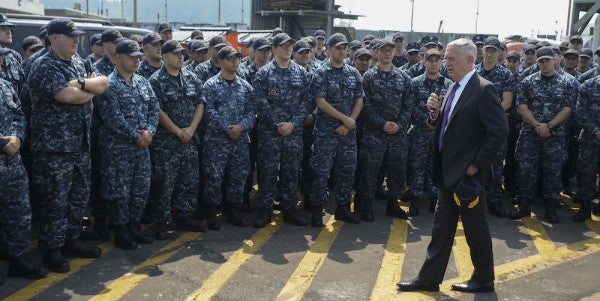 Secretary of Defense James Mattis is well known for having delivered some controversial quotes in the past, and he uttered yet another during a speech last week to sailors at Naval Base Kitsap in Washington.

During a short speech on Aug. 9 followed by a question-and-answer period, Mattis thanked the sailors of the USS Kentucky for being in the Navy, saying they'd never regret that service.

“That means you're living,” Mattis said, according to the official Department of Defense transcript.

“That means you're not some p–y sitting on the sidelines, you know what I mean, kind of sitting there saying, 'Well, I should have done something with my life.' Because of what you're doing now, you're not going to be laying on a shrink's couch when you're 45 years old, say 'What the hell did I do with my life?' Why? Because you served others; you served something bigger than you.”

The Navy reversed its policy of only allowing males to serve aboard submarines in 2010, according to the U.S. Naval Institute. A spokesman for Submarine Group 9 could not immediately say whether the USS Kentucky had any female sailors onboard.

Mattis went on to say that he wished he were young enough to go out to sea with the Kentucky's crew, though the retired general joked, “there's a world of difference between a submariner and a Marine, you know what I mean?”