Lawmakers Are Freaking Out Over Mattis’ Resignation

Defense Secretary James Mattis will step down from his post in February, President Donald Trump announced on Thursday, bringing an end to... 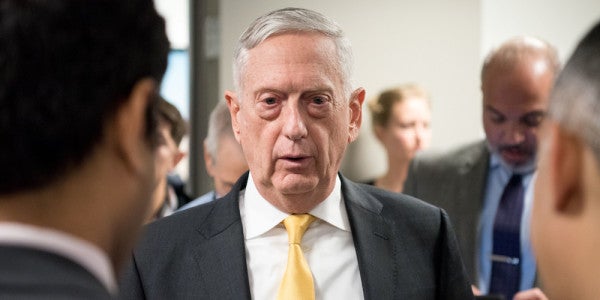 Defense Secretary James Mattis will step down from his post in February, President Donald Trump announced on Thursday, bringing an end to yet another cabinet official's tenure during the past two years.

Mattis expressed considerable differences with Trump in his resignation letter to the president, writing that he is leaving “because you have a right to have a Secretary of Defense whose views are better aligned with yours.”

The move sent shockwaves around Washington, coming at a time when Republicans have become increasingly frustrated with Trump's military policy decisions, which have ran counter to the advice of many of his top advisors and traditional GOP orthodoxy.

“That's what happens when you ignore sound military advice,” Illinois Rep. Adam Kinzinger, a Republican, wrote on Twitter in his immediate reaction to Trump's announcement.

Sen. Lindsey Graham said in a statement he felt a “great sadness” upon learning of Mattis' resignation, saying he “is one of the great military leaders in American history” and should be proud of his service.

“General Mattis is a combination of intellect and integrity,” Graham added. “He has been in the fight against radical Islam for decades and provided sound and ethical military advice to President Trump. He is a role model for the concept of Duty, Honor, Country.”

Democratic Sen. Chris Coons called Mattis' resignation “more bad news for our national security” because he was “one of the most seasoned & capable advisors” Trump has had.

“A Secretary of Defense quitting over a public disagreement with a President whose foreign policy he believes has gone off the rails is a national security crisis,” said Connecticut Sen. Chris Murphy, a Democrat. “No way around it.”

Sen. Mark Warner called the resignation “scary” because “Mattis has been an island of stability amidst the chaos of the Trump administration.”

The consternation over Mattis' resignation comes on the heels of Trump's decision to withdraw all US military personnel from Syria, a move that enraged conservatives and put much of his allies on edge.

Republicans and Democrats both largely agreed that such a decision would embolden American adversaries like Russia and Iran while giving new breathing room for the potential return of brutal terrorist groups like ISIS.

SEE ALSO: Why Mattis Is Leaving The Pentagon, In 3 Sentences