Mattis Tells Syria: Do Not Mess With Us

Editor’s Note: This article by Richard Sisk and Oriana Pawlyk originally appeared on Military.com, the premier source of information for the... 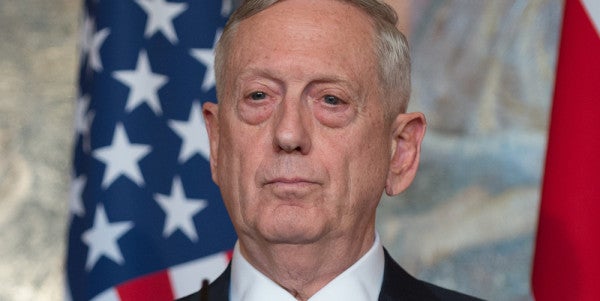 Editor’s Note: This article by Richard Sisk and Oriana Pawlyk originally appeared on Military.com, the premier source of information for the military and veteran community.

Don't even think about it, Defense Secretary Jim Mattis said Monday to the Syrian regime of President Bashar al-Assad on employing chemical weapons.

“The Syrian government would be ill-advised ever again to use chemical weapons,” Mattis said, suggesting that the U.S. response would far more intense than the 59 Tomahawk cruise missiles launched last Thursday from the Arleigh Burke-class destroyers Ross and Porter in the eastern Mediterranean.

In a characteristically brief statement, Mattis rejected the claims of Russia, Assad's chief supporter, that many of the T-LAMs, or Tomahawk Land Attack Missiles, missed their targets and the rest caused little damage to the Shayrat airfield north of Damascus.

“The assessment of the Department of Defense is that the strike resulted in the damage or destruction of fuel and ammunition sites, air defense capabilities, and 20 percent of Syria's operational aircraft,” he said.

Mattis also suggested that Syrian state TV showing aircraft taking off the day after the attacks was meant to cover up the severe damage that had been inflicted. The Pentagon said on the night of the attacks that the runways deliberately were not targeted since they were easy to repair.

Mattis said, “The Syrian government has lost the ability to refuel or rearm aircraft at Shayrat airfield and, at this point, use of the runway is of idle military interest.”

The missile strikes were the latest sign of the more aggressive stance taken by the Pentagon since Mattis took over in January. The U.S. has sent more troops into Iraq and Syria in line with what Mattis has called an “accelerated” campaign against the Islamic State of Iraq and Syria.

In a Pentagon briefing Monday, Army Col. John Thomas said, “We didn't crater the runway. We were not trying to make the airfield long-term inoperable. What we did was degrade the Syrians' ability to carry out chemical weapons attacks from that base in the short term.”

Thomas said the strikes destroyed “tens of thousands of gallons of fuel” and “destroyed or rendered inoperable” more than 20 aircraft.

The U.S. has also begun a protracted air campaign against the Al Qaida in the Arabian Peninsula group in Yemen, and allowed more leeway for U.S. Africa Command to conduct airstrikes against the Al Shabab group in Somalia.

Over the weekend, Navy Adm. Harry Harris, commander of U.S. Pacific Command, canceled port visits to Australia for the carrier Carl Vinson and its support ships and ordered the battle group to waters off Korea to guard against the North Korean threat.

Mattis issued the statement as the G-7 group of nations — the U.S., Canada, France, Germany, Italy, Japan, and Italy — met in Italy for one of the group's periodic meetings that usually deal with economics and now is focused on a political settlement to the six-year-old Syrian civil war that would eventually lead to Assad stepping down.

“He's toxifying the reputation of Russia by his continual association with a guy who has flagrantly poisoned his own people,” Johnson said of the bombing of the northwestern town of Khan Sheikhoun last Thursday allegedly with the nerve agent Sarin. The attack reportedly killed at least 89 people.

Earlier, President Donald Trump placed well done calls to Cmdr. Andria Slough, commander of the Porter, and Cmdr. Russell Caldwell, commander of the Ross. In a readout of the calls, the White House said that Trump “commended the two commanders and their crews for the speed, precision, and effectiveness with which they carried out the operation.”

Trump also placed calls to British Prime Minister Theresa May and German Chancellor Angela Merkel and received their support for the U.S. action in Syria and for holding Assad accountable, the White House said.

The U.S. then let it be known that Air ForceF-22 Raptors, the most advanced air-to-air combat fighters in the U.S. inventory, were flying cover in Syrian airspace.

“We have continued to maintain an air presence, including the use of F-22s, in Syrian airspace in order to protect forces on the ground and keep pressure on ISIS,” a spokesman for U.S. Central Command Air Forces said.

Secretary of State Rex Tillerson was expected to begin talks in Moscow on Tuesday with Russian Foreign Secretary Sergei Lavrov. There had been speculation that Tillerson would also meet with Putin, but Russian officials said that was no longer a possibility after the missile strikes last week.