Report: Mattis And Tillerson Are Trying To Talk Trump Out Of Striking North Korea

The Trump administration is debating a “bloody nose” attack on North Korea, recent reports say, with the president's inner circle... 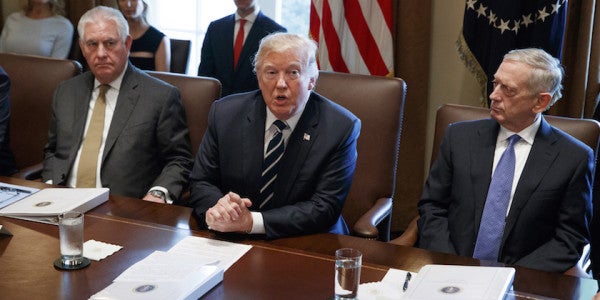 The Trump administration is debating a “bloody nose” attack on North Korea, recent reports say, with the president's inner circle split and apparently teetering between endorsing a strike and holding out hope for diplomacy.

Both The Telegraph and The Wall Street Journal have portrayed Secretary of State Rex Tillerson and Secretary of Defense James Mattis as trying to caution President Donald Trump against a strike, and the national security adviser, H.R. McMaster, as advocating it.

The reports come after months of mixed messages and dozens of shifts in the U.S.'s stance on North Korea.

The bloody-nose strategy, which calls for a sharp, violent response to some North Korean provocation, puts a lot of weight on the U.S.'s properly calibrating an attack on North Korea and Pyongyang's reading the limited strike as anything other than the opening salvo of an all-out war.

For that reason, even the limited strike envisioned by North Korea hawks carries a tremendous risk of global — and possibly nuclear — catastrophe.

Is this why the Trump administration never seems to agree on anything?

In mid-December, Tillerson made headlines by appearing to announce a major change in the U.S.'s North Korea policy.

“We're ready to talk anytime North Korea would like to talk, and we're ready to have the first meeting without precondition,” Tillerson said.

Asked specifically about the apparent shift, the White House said, “The president's views on North Korea have not changed.”

Meanwhile, McMaster flew to the opposite end of the spectrum, saying the chance of war was “increasing every day” and telling BBC News the U.S. would “compel the denuclearization of North Korea without the cooperation of that regime” if needed.

Mattis, characteristically, has been tight-lipped on the subject.

Throughout his presidency, Trump has also appeared all over the map on North Korea, alternating between relishing the opportunity to negotiate with the country's leader, Kim Jong Un, and taunting him about the size and power of his nuclear arsenal. At one point, Trump directly undercut Tillerson, telling him he was “wasting his time” trying to talk to North Korea.

For now, the nays seem to have it, but they might not hold out

On Tuesday, North Korea and South Korea are expected to hold their first official talks in two years, ahead of the 2018 Pyeongchang Winter Olympics in February.

Trump has expressed cautious optimism about the talks, and the U.S. and South Korea have agreed to halt annual military exercises, a major irritant to North Korea, until the end of the Paralympics in mid-March.

Kim, meanwhile, has expressed hope that the games will proceed safely, and the extreme tensions of the past year seem to have slightly thawed.

But trouble looms in a persistent story centered on Tillerson's shaky footing in the White House.

Multiple outlets have reported in the past few months that Trump's team has considered replacing the secretary of state with Mike Pompeo, the current CIA director, who is thought to be on the hawkish side and could shift the balance of opinions in the Oval Office.

If the U.S. were to attack North Korea, the fate of the world could be in Kim's hands

The U.S. most likely has the tools and expertise to pull off a decisive, clean attack that would humiliate and batter North Korea.

The logic of a limited strike, though, ultimately assumes a limited response, and that Kim would not initiate the destruction of his country by the U.S. by retaliating against the loss of a few troops, ships, or missiles.

If Kim were to take the hit without retaliating, he would retire to a gravely weakened position and international standing, setting a precedent for the US reaching out and striking whenever provoked.

If Kim were to retaliate, we could have what Mattis has predicted would be “a war more serious in terms of human suffering than anything we've seen since 1953” wherein millions could die.