Secretary of Defense James Mattis condemned Russia’s attempts to “redraw international borders by force” and pledged support for Ukraine on... 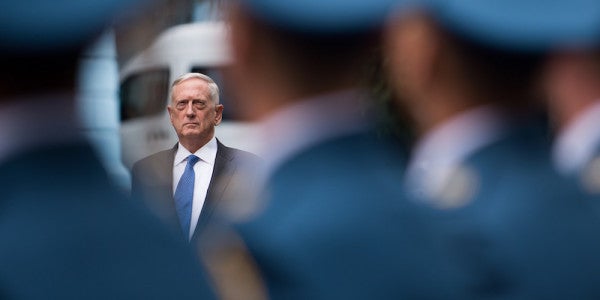 Mattis is the first Pentagon chief in a decade to visit Ukraine, which has been on the front lines of Russian aggression since Moscow annexed Crimea in 2014 and began supporting armed insurgents in eastern Ukraine.

Deliberations in the Trump administration have heated up in recent months over whether to provide lethal defensive weapons, such as Javelin antitank missiles, to Ukrainian forces that are battling the separatist insurgency.

Mattis said providing defensive weapons to #Ukraine should not be seen as provocative “unless you are an aggressor.” https://t.co/4EYSKObGEOpic.twitter.com/zEErWD8XAZ

The debate has been awkward for Donald President Trump, who faces multiple investigations into Russian interference in the 2016 presidential election and possible collusion between Moscow and his campaign.

Washington has no treaty obligations with Ukraine and the Obama administration gave nonlethal military aid to the government in Kiev. It also shared intelligence and posted U.S. troops to the Lviv region in western Ukraine, far from the conflict zone, to train Ukrainian soldiers.

Critics fear sending sophisticated U.S. arms to a low-level conflict on Russia’s border would worsen Washington’s already precarious relations with Moscow. Those who support sending arms argue that the war has been prolonged because the U.S. has not provided stronger support.

Senior Defense and State Department officials have privately supported proposals to supply more lethal weapons, according to U.S. officials, but the White House has yet to make a decision.

Standing beside Ukrainian President Petro Poroshenko at the presidential building in Kiev, Mattis indicated he was in favor of stepping up military aid, but he stopped short of committing to it.

Mattis said he doesn’t consider providing defensive weapons to be controversial because Ukraine is fighting a foreign enemy in defense of its sovereign borders.

“Defensive weapons are not provocative unless you're an aggressor, and clearly Ukraine is not an aggressor since it's their territory where the fighting is happening,” he said.

Mattis declined to reveal his advice to Trump on the issue, saying, “I owe him some confidentiality on that.”

Washington has provided Ukrainian forces with about $750 million in nonlethal materiel since November 2015, including small reconnaissance drones, Humvees, and night-vision goggles, according to the Pentagon.

The aid includes mobile radars that can be used to warn against incoming mortar and artillery attacks and to pinpoint their source.

Poroshenko said on Aug. 24 that he was grateful for the U.S. assistance, but that further aid would apply greater pressure on Moscow and deter Russian forces from further incursions.

“Having discussions about lethal weapons would increase the price if Russia made the decision to attack my troops and my territory,” he said. “And that would be a strong motivation to stop them.”

Poroshenko met with Trump at the White House in June. The administration subsequently announced additional financial sanctions on Russians involved in supporting the secessionists in Ukraine.

The fighting has continued despite several cease-fires negotiated by international leaders. The efforts include the 2015 Minsk agreement, which calls for Russia to end its occupation of Crimea.

Ukraine aspires to join Estonia, Latvia, Lithuania and other former Soviet bloc nations in the North Atlantic Treaty Organization. But Russian President Vladimir Putin is strongly opposed to further expansion of the military alliance that originally was created to counter the Soviet Union.

Secretary of State Rex Tillerson already has visited Kiev to show support. On Aug. 24, the 26th anniversary of Ukraine’s independence from the former Soviet Union, he expressed U.S. backing for the beleaguered country.

“We remain steadfast in our support for your sovereignty, territorial integrity and democracy,” Tillerson said.

Sen. John McCain, chairman of the Senate Armed Services Committee, and other Republican hawks in Congress have urged Trump to break with the Obama-era limits on sending lethal weapons to Ukraine.

“It is long past time for the United States to provide Ukraine the defensive lethal assistance it needs to deter and defend against further Russian aggression,” McCain said in a statement.

Doing so was part of the Republican Party’s platform at its convention last year until it was cut by the Trump campaign. Since then, the administration has declined to commit one way or the other.

“We're not going to rule that out right now,” State Department spokeswoman Heather Nauert said Wednesday. “No decisions have been made.”

During Mattis’ visit to Kiev, Ukraine celebrated its independence day with a massive military parade that featured hulking tanks, ballistic missiles and thousands of Ukrainian troops goose-stepping in formation.

For the first time, U.S. Army soldiers and a color guard participated in the annual parade. The two dozen troops are part of a multinational training group in Ukraine.

Mattis looked on from Maidan Square, a historic public plaza famous for large protest rallies against Russia. He also placed roses at a memorial to Ukraine's “Heavenly Hundred,” protesters killed in the square by pro-Russia forces in late 2013 and 2014.

“Have no doubt, the United States stands with Ukraine,” Mattis said. “We support you in the face of threats to sovereignty and territorial integrity, to international law and to the international order…. And despite Russia's denials, we know they are seeking to redraw international borders by force.”