Mattis: US Still Aiming For Diplomacy With North Korea Despite Trump’s Tweets

Hours after President Donald Trump tweeted that “talking is not the answer” in regard to the increasingly tense situation with... 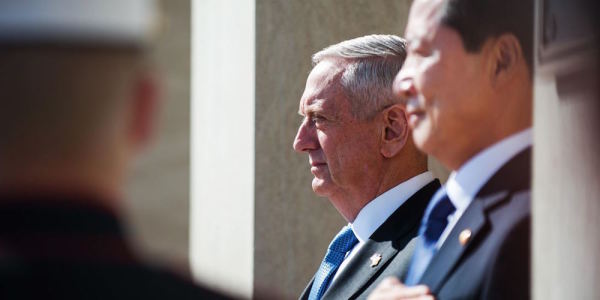 Hours after President Donald Trump tweeted that “talking is not the answer” in regard to the increasingly tense situation with North Korea, Defense Secretary James N. Mattis emphasized diplomacy as the path forward.

“We continue to work together, and the minister and I share responsibility to provide for the protection of our nation, our populations and our interests, which is what we are here to discuss today,” he said.

Trump had taken to Twitter less than three hours earlier to respond to North Korea’s latest missile test, which flew over northern Japan on Monday, and to subsequent threats from the isolated nation’s leader, Kim Jong Un.

“The U.S. has been talking to North Korea, and paying them extortion money, for 25 years. Talking is not the answer!” Trump tweeted Wednesday morning.

The statement raised questions about what the president meant, if diplomacy was not the way forward. Trump’s Cabinet members, including Mattis and Secretary of State Rex Tillerson, have repeatedly advocated for dialogue to ease tensions with the defiant country.

North Korea has fired 21 missiles during 14 tests since February, including three on Saturday, with many landing in the Sea of Japan, also known as the East Sea, a wide area of ocean separating the two countries.