Secretary of Defense Jim Mattis warned on Sunday of a “massive,” and “overwhelming” military response to North Korea's missile and nuclear... 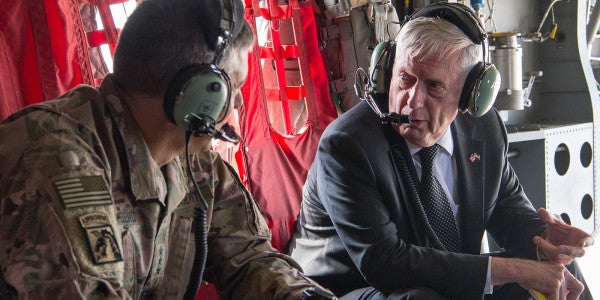 Secretary of Defense Jim Mattis warned on Sunday of a “massive,” and “overwhelming” military response to North Korea's missile and nuclear weapons programs after a small group meeting with President Donald Trump in response to Pyongyang testing its sixth and largest-ever nuclear device.

Mattis stressed that the US has “many” military options for dealing with North Korea, but that the US does not seek the annihilation of any country.

Mattis was most likely referring to the US military's roughly 28,000 troops located in South Korea and its massive presence in Japan and in the Pacific. At the time of Mattis' speaking, the US does not have an increased naval or military presence in the region, though the US and South Korea did just complete a joint war-gaming exercise.

Earlier on Sunday Trump floated the idea of cutting off trade with China, North Korea's treaty ally and main trading partner, in response to North Korea's greatly increased provocations. “The United States is considering, in addition to other options, stopping all trade with any country doing business with North Korea,” Trump wrote in a tweet.

The Trump administration has repeatedly said that “all options” are on the table in dealing with North Korea, and stressed military might represents a part of that package.

The nuclear device tested by North Korea on Sunday had a yield of hundreds of kilotons, meaning it was most likely a hydrogen or thermonuclear bomb, according to expert estimates and North Korea's own statements.

The completion of an intercontinental ballistic missile and a thermonuclear warhead represent North Korea achieving its ultimate goal of building a credible deterrent against invasion and regime change. Experts assess that North Korea's main goal in developing nuclear weapons is to secure its regime, and that it will not use the weapons offensively, unless provoked.