Spencer Daily breathed heavily into the phone. Alcohol tinted his breath and beads of sweat coursed down his forehead. “911. … Continued 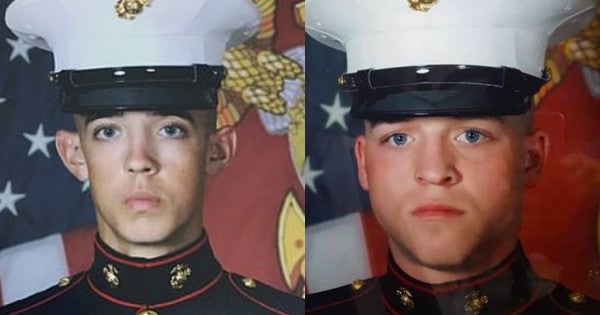 Alcohol tinted his breath and beads of sweat coursed down his forehead.

“Is he conscious and alert?,” she asked.

“Where did you shoot him at?”

He hung up and waited outside on the third deck of the Oscar barracks for military policemen to take him into custody.

The file, which The Island Packet obtained through an open records request submitted in January, contains interviews, photographs, and narratives.

Daily, of Youngstown, Ohio, and Wallingford, from Standish, Maine, were both aircraft ordnance technicians with VMFAT-501.

They were also friends.

It was a typical Friday for both Daily and Wallingford.

He’d driven to the Palmetto State Armory in Ridgeland, where he bought almost $165 in ammunition and gun accessories, made another stop to pick up windshield wipers and motor oil, and went by the grocery store before coming back to base.

He met up with another Marine in the parking lot sometime after 7 p.m.

They were supposed to go to dinner, but Daily changed his mind because he’d been drinking all day.

As they stood in the parking lot, Daily motioned the second Marine to his truck. He pulled out a backpack that had a gun in it. He unloaded the pistol and handed it to the other Marine.

He held it uncomfortably for a few seconds before handing it back to Daily.

Daily loaded the gun again with hollow point rounds, then said to his friend:

“Dude, you’re a Marine,” he said. “Why are you scared of being around a gun?”

The Marine later told investigators Daily had made fun of him before advising him to keep a firearm in the glovebox of his vehicle, too. If law enforcement, stopped you, Daily said, officers couldn’t search the vehicle without permission.

Daily regularly handled guns outside of his Marine duties, sometimes even going to the range with Wallingford to practice shooting.

Around 8:45 p.m., when Daily was back in his room, he got a text message in a group chat asking if anyone wanted to go out for drinks.

Photographs of Daily and Wallingford’s room would later document multiple empty Shocktop beer cans crushed on their floor and other cans in the fridge.

Daily would tell investigators he probably had nine beers that night.

So, instead of going out, Daily and Wallingford decided to play video games.

‘The guy that killed my friend’

Daily, who had hopes of joining the U.S. Coast Guard in a few months, and Wallingford sat shoulder to shoulder on their futon playing “Call of Duty.”

They had set up two small TVs on the tops of their dressers.

Wallingford used his phone to FaceTime audio a third Marine so the three could talk strategy.

Wallingford hadn’t had anything to drink.

The men’s thumbs maneuvered over the controllers and virtual gunfire made popping sounds as the game continued.

Daily then picked up the handgun with his left hand and pointed it at Wallingford in teasing way, he told investigators, they way he sometimes did when they were “joking around” and “rough housing.”

This time, he pulled the trigger, sending a single slug into Wallingford’s skull.

‘Wally! No!” the third Marine heard through the phone followed by a “blood curdling scream.”

Then the line went dead.

Inside the room, shots continued to ring out. The slugs hit the wooden bunk bed frame and brick walls of the barracks.

Investigators found 15 spent shell casings, a number of bullet fragments, and two handguns; the one Daily used to kill Wallingford, which wasn’t registered on base, and another believed to have belonged to Wallingford.

Daily continued to shoot out of frustration, investigators said.

One of the TVs toppled to the ground before Daily stopped shooting and threw the gun across the room, where it landed behind a bed.

The call didn’t go through.

Nor did a second.

Daily left the room — Wallingford lay slumped over on the futon, the game controller still in his hand and a faint pulse in his heart — to get better cell reception.

The fourth call went through and lasted 39 seconds.

Marines began to crowd around the Oscar barracks.

One called 911 from his room because he feared an active shooter was banging on doors.

The Marine who lived in the room below the crime scene said it sounded like a hammer was hitting the floor four or five times, so he texted Wallingford.

He did not get a response.

A Marine who lived next door and shared a bathroom with Daily and Wallingford heard screaming and tried to get into the room but couldn’t.

He told investigators he saw Daily telling people “Don’t worry about it,” in the hallway.

Others were further away but heard the shots and wanted to know what happened.

Military police arrived, ran to Daily and placed him in handcuffs.

“I’m the guy that killed my friend.”

Medical first responders rushed into room 364A and tried to save Wallingford.

They were too late.

The Beaufort County coroner would later sign a death certificate that said Wallingford died of cerebral disruption from a single, penetrating, close-range gunshot wound to the head.

On the night of the shooting, Daily already seemed to know the fate that awaited him.

Daily was taken to a holding cell where he was kept before an interview with investigators.

He cried, hit the walls, yelled, and complained that he needed to change his contacts because they’d been in too long.

Eventually, he’d tell investigators that he killed his roommate.

He told them he hadn’t meant to.

He didn’t know the gun was loaded, he said.

He said he didn’t want to hurt or kill Wallingford.

He said he was just playing around.

On Jan. 6, Daily faced a general court-martial, the highest and most severe military court.

Instead of the decade in prison Daily thought he’d be sentenced to, he received 69 months after pleading guilty to involuntary manslaughter, willful discharge of a firearm, and violating a military order.

He also forfeited pay and was dishonorably discharged.

He’s imprisoned at the Naval Consolidated Brig in Hanahan, the Post and Courier reported, less than 20 miles away from Charleston.

Gone but not forgotten

Memories of Tyler Wallingford have lived on.

More than a week after his death, his body was brought back to Maine. A special procession along a section of I-95 honored his service.

Wallingford — loved ones called him “Wally” — was a fourth-generation firefighter and served as a volunteer firefighter in Standish, from 2013 until he joined the military in 2016.

He also served as a reserve firefighter for the Beaufort/Port Royal Fire Department.

Some post whenever they miss him most, others on significant dates like the one-year anniversary of his death or the days that would have been his 22nd and 23rd birthdays.

Some share photos, videos, and memories of the bubbly young man who loved to skydive and travel.

Others share snapshots of the places the memorial bracelets with Wallingford’s name on them have been.

Wally will not be forgotten.