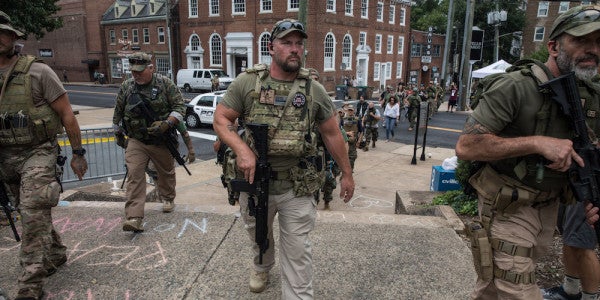 McAuliffe told The New York Times in an impromptu street interview Sunday morning that police in Charlottesville did their best considering the circumstances.

“It’s easy to criticize, but I can tell you this, 80% of the people here had semiautomatic weapons,” McAuliffe said.

Unidentified militia has arrived at #EmancipationPark ahead of the #Charlottesville rally with guns in tow. pic.twitter.com/zCLCBU78PF

Law enforcement in Charlottesville have received widespread criticism from counter-protesters, bystanders, and participants of the white nationalist “Unite The Right” rally. Many called the police's handling of the event hands-off, often appearing outnumbered and waiting too long to break up skirmishes between protesters and counter-protesters.

Former police officials in New York and Philadelphia made similar criticisms that, despite a large mobilization of law enforcement personnel — Charlottesville's mayor put the number at 1,000 — police failed to separate the clashing factions at the beginning of the event, allowing the violence to quickly grow out of hand.

Though McAuliffe strongly commended law enforcement's handling of the event, he appeared to suggest that police were unprepared for who actually showed up to the rally.

“You saw the militia walking down the street, you would have thought they were an army … I was just talking to the State Police upstairs; had better equipment than our State Police had,” McAuliffe said. “And yet not a shot was fired, zero property damage.”

McAuliffe's response that law enforcement's handling of the violence was successful because there were no bullets fired and “zero property damage” would appear to ignore that dozens were left injured and a 32-year-old woman, Heather Heyer, was killed when an apparent white supremacist plowed his car into a crowd.

McAuliffe, for his part, suggested that Heyer's death couldn't have been prevented.

“You can’t stop some crazy guy who came here from Ohio and used his car as a weapon. He is a terrorist,” he said.

Here's how ProPublica's A.C. Thompson described the scene, and the police response, in Charlottesville Saturday:

At about 10 a.m. today, at one of countless such confrontations, an angry mob of white supremacists formed a battle line across from a group of counter-protesters, many of them older and gray-haired, who had gathered near a church parking lot. On command from their leader, the young men charged and pummeled their ideological foes with abandon. One woman was hurled to the pavement, and the blood from her bruised head was instantly visible.

Standing nearby, an assortment of Virginia State Police troopers and Charlottesville police wearing protective gear watched silently from behind an array of metal barricades — and did nothing.