Fed up with what he calls White House inaction in Afghanistan, Sen. John McCain unveiled his own strategy for the... 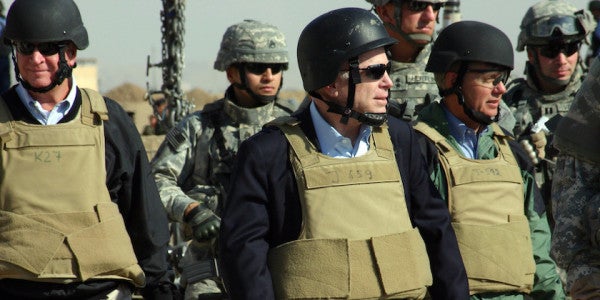 Fed up with what he calls White House inaction in Afghanistan, Sen. John McCain unveiled his own strategy for the war-torn country — offering a plan that provides U.S. military commanders with broader authority to pursue militant forces.

McCain, an Arizona Republican and chairman of the Senate Armed Services Committee, has urged the Trump administration for months to submit to Congress a new Afghanistan strategy due to the worsening security situation.

Nine U.S. troops have been killed in the country thus far this year — as many as were killed in all of 2016.

Internal debates among the president’s chief advisers have delayed a White House strategy, according to U.S. officials not authorized to speak publicly on the matter.

“Nearly seven months into President Trump’s administration, we’ve had no strategy at all as conditions on the ground have steadily worsened,” McCain said in a statement. “The thousands of Americans putting their lives on the line in Afghanistan deserve better from their commander-in-chief.”

McCain’s strategy, which was issued as an amendment to next fiscal year’s defense bill, includes additional U.S. troops for counterterrorism missions, allowing U.S. advisers to work closer to the front lines with Afghan officers and issues U.S. commanders broader authority to target Taliban insurgents, Islamic State militants and other militias.

“Adopting a clear policy and strategy in Afghanistan, backed with the authorities and resources necessary for success, would be a critical step toward restoring that kind of leadership, which has been absent for far too long,” he said.

The Pentagon has 8,400 troops deployed in Afghanistan to train and advise Afghan forces; most rarely participate in direct combat. The combined force with other NATO countries is about 13,500.

Gen. John W. Nicholson Jr., the top U.S. commander in Afghanistan, is seeking 3,000 to 5,000 more troops to help train Afghan military and police forces as they battle an array of insurgents in various parts of the country.

That proposal has run into headwinds from some advisers in the administration who question the goal of sending additional forces into a war that has dragged on so long without producing a clear result.

Meanwhile, there have been several high-profile attacks in Afghanistan claiming hundreds of lives of innocent civilians.

McCain, who currently is undergoing brain cancer treatment, intends to return to the Senate in the coming weeks to debate the amendment.