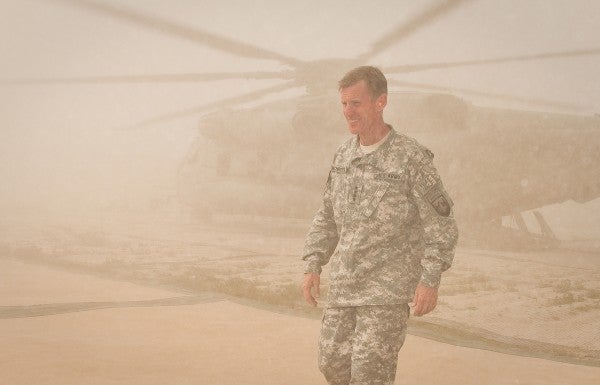 The president prompted outrage among some veterans when he dismissed McRaven as “a Hillary Clinton backer and an Obama backer” in an interview with Fox News.

McRaven has emerged as a vocal Trump critic. He called on the president to revoke his security clearance after Trump threatened to do so for a former CIA director. McRaven recently voiced his concern that Trump refers to members of the media as “enemies of the people.”

McChrystal told ABC News this type of inflammatory rhetoric damages trust between the military and its commander in chief.

“The fact that he would take on people in this vitriolic manner, I think is pretty upsetting to people,” he said in the interview. The retired general also commented on Trump's insistence that his support of a larger defense budget proves he is more supportive of the military than previous presidents.

“That's not the best metric of whether you support the military,” McChrystal said. “I don't think that President Trump has developed as deep — a real connection of trust — with the military as perhaps he thinks he has.”

In October, Military Times published poll results showing that since President Trump was elected, active-duty support for the commander in chief has decreased. Compared to previous years' results, service members who say they support the president have dropped by 2% points to 46%, whereas the number of troops who disapprove the has risen by 6% points.

The poll also showed that ambivalence among active-duty troops has decreased, suggesting that Trump's rhetoric has led to polarization within the military. McChrystal said he sees the increased tension as a warning sign.

“Trump, he's a populist by nature. He communicates to inflame and stimulate thinking and passions and people and that's not a new thing,” McChrystal said. “It usually doesn't end well, whether they are domestic politicians like Joe McCarthy or others who have simplified things and inflamed people. So there's a cautionary tale in this.”