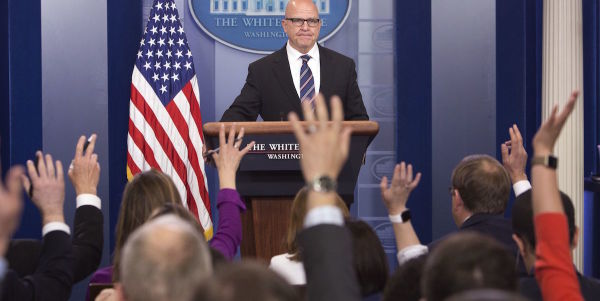 Speaking to reporters at the White House, H.R. McMaster called Trump’s conversation “consistent with the routine sharing of information” between the president and a foreign power.

McMaster said Trump “wasn’t even aware” of the source of the information and again called “the premise” of a Washington Post report that Trump had improperly shared highly classified intelligence “false.”

“It is wholly appropriate for the president to share whatever information he thinks is to the advancement of the security of the American people,” McMaster said.

McMaster, echoing a consistent Trump complaint, sought to turn the focus of the latest flap to whomever leaked the nature of the conversation to reporters — even as he maintained that nothing inappropriate was discussed.

“Our national security has been put at risk by those violating confidentiality, and those releasing information to the press that could be connected with other information available to make American citizens and others more vulnerable,” he said.

According to the Post report, senior U.S. officials realized that Trump had disclosed highly sensitive information to Russian Foreign Minister Sergey Lavrov and Russian Ambassador to the United States Sergey Kislyak, and moved quickly to try to contain the fallout by calling U.S. senior intelligence officials.

McMaster said that if any official later called to warn U.S. intelligence agencies about a potential breach, it was “maybe from an overabundance of caution.”

Trump’s decision to share the intelligence, which he has said related to a potential threat to commercial aviation, was not planned, McMaster indicated.

He said Trump raised the issue “as a basis for common action and coordination” to address the threat from terrorism.

“He made the decision in the context of the conversation,” he said.