McMaster: Russia Is Trying To ‘Break Apart Europe’ With Disinformation And Propaganda

President Donald Trump's national security adviser, H.R. McMaster, addressed heightening tensions between the US and Russia, as well as Trump's... 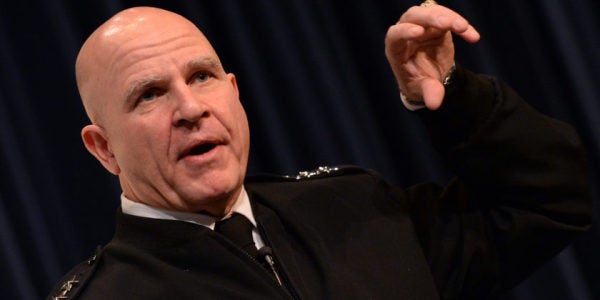 President Donald Trump's national security adviser, H.R. McMaster, addressed heightening tensions between the US and Russia, as well as Trump's understanding of the threat Russia poses, during an interview with MSNBC's Hugh Hewitt that aired on Sunday.

McMaster did not specifically address Hewitt's question as it related to Trump, but went on to note that Russia's actions in recent years, like its aggression toward neighboring Ukraine and its 2014 annexation of Crimea, have drawn censure from the international community, which responded by imposing tough economic sanctions on Russia.

“Russia must play a much more responsible role in the world if it's going to be a full-fledged member of the international community,” McMaster told Hewitt.

He did not broach the subject of Russia's latest transgression, a wide-ranging and multifaceted attack on the 2016 American election that was undertaken to tilt the race in Trump's favor, until Hewitt brought it up.

McMaster characterized it as a “sophisticated campaign of subversion and disinformation and propaganda that is going every day in an effort to break apart Europe and that pit political groups against each other … to sow dissension and conspiracy theories.” He did not elaborate on specific actions Russia took with respect to its interference in the US election, but criticized Russia's role in escalating the Syrian civil war and its support for Iran's objectives in the Middle East.

McMaster's apparent reluctance to comment directly on Russia's US election interference seems to be a reflection of Trump's own views. Trump has so far offered a lukewarm acknowledgment that Russia meddled in the 2016 race after repeatedly casting doubt on the conclusions of the US intelligence community, which found that Putin personally ordered the hacking of the Democratic National Committee's servers and the Clinton campaign, as well as an elaborate disinformation campaign that included flooding social media with “fake news” designed to undermine Clinton and boost Trump.

McMaster also told Hewitt that while there should be consequences for Russia's “destabilizing behavior” across the globe, it should not prevent the US from cooperating with Russia on certain national security goals, like deescalating the situation with North Korea, which has significantly ramped up its missile testing program in recent weeks.