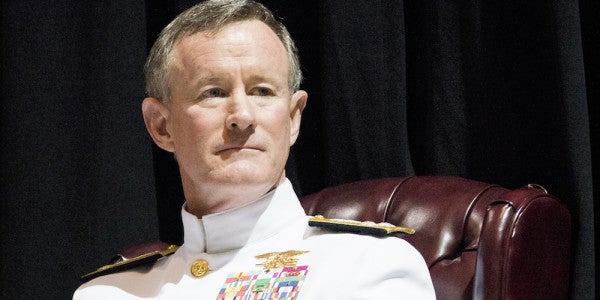 Former Navy SEAL Admiral Bill McRaven, the former commander of the U.S. Special Operations Command who helped plan the 2011 raid on Osama Bin Laden, praised the young US citizens who marched for justice in the wake of a tragic school shooting in Florida that left 17 people dead.

“People are often surprised when I tell them that I am a huge fan of the youth of America,” McRaven wrote on Twitter. “But I have witnessed the Millennials in action on the battlefields of Iraq and Afghanistan and I have seen the nation's remarkable teenagers as they work to earn a place in our college classrooms.”

McRaven wrote that he has “learned to respect and admire their personal courage, their perseverance, and their sense of fellowship,” but added that his respect has taken on a new character in the wake of the Florida shooting.

“When the classroom became a battlefield, these young Americans seemed to rise to even greater heights; sacrificing their lives for their fellow students, consoling the families of the fallen, inspiring a community to action,” wrote McRaven, referring to students, some as young as 15, who died protecting their classmates from gunfire.

He said the wave of student protests and calls for political action to address gun violence have inspired him.

“I could not be prouder of them!” McRaven wrote of the students. “This is exactly what we need the youth of America to do: to stand strong, to stand together, to challenge the laws that have not served them well.”

Since the shooting, the surviving students from Marjory Stoneman Douglas High School in Florida have made daily media appearances and advocated for action on gun control, which has been politically unproductive for years.

“We adults can learn a lot from them,” McRaven wrote of the students.