McRaven: Trump ‘needs to be very careful’ about pardoning US troops accused of war crimes 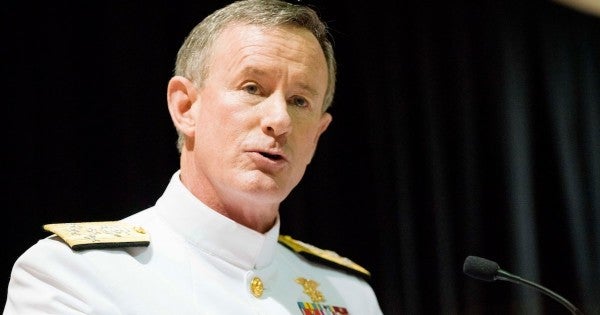 “I think the president needs to be very careful at this point,” McRaven said in a Fox News interview on Tuesday. “Obviously the president can pardon he thinks is appropriate to pardon.”

“But the way it works in the military, you have to be careful as a senior commander about unduly influencing the process before the investigation has been adjudicated,” McRaven added.

The White House is believed to have requested dossiers on numerous cases, including one on U.S. Navy Special Operations Chief Edward Gallagher, a Navy SEAL who is scheduled to appear in court next week on charges of killing an enemy prisoner with a knife and shooting Iraqi civilians in 2017.

The pardoning process typically takes months, one senior military official told The Times, but the Justice Department was asked to have the files ready by Memorial Day weekend.

Questions surrounding Trump’s willingness to pardon the alleged war criminals have intensified after he pardoned the former Lt. Michael Behenna, a U.S. Army Ranger who was convicted of killing an Iraqi prisoner in 2008. The White House in a statement reasoned that Behenna was a “model prisoner” during his incarceration and highlighted the military’s “broad support” of his service.

McRaven, who previously rebuked Trump after the president sought to revoke the security clearances of former US intelligence officials, said any pardons from the commander-in-chief ought to be delayed until the criminal matters are settled in court.

“Now, once the trial is over and the president has an opportunity to read all the evidence and make a decision, obviously he’s well within his right to pardon whoever he thinks,” McRaven added.

McRaven is not alone in this thinking. Retired US Marine Corps Gen. Charles Krulak, the 31st commandant of the Marine Corps, said in a statement that if Trump proceeds with the pardons, “he will betray these ideals and undermine decades of precedent in American military justice that has contributed to making our country’s fighting forces the envy of the world.”

“We can talk all we want about what he’s doing with the rule of law under his authority but to start saying that a trial by jury under the [Uniform Code of Military Justice] is now something that can be overturned is sending just a terrible signal to the men and women who are currently serving,” Krulak told Task & Purpose.

“It sets a precedent that we could possibly regret.”