Sen. Martha McSally calls out service academies: ‘Why are we putting 19-year-olds in charge of 18 year olds?’

Sexual assault has been on the rise at the service academies. 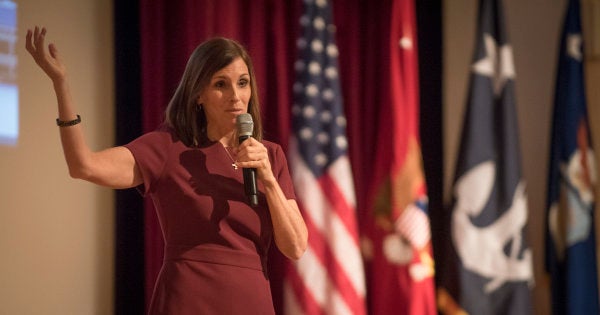 Martha McSally actively served 22 years in the Air Force, rising to the rank of colonel before she retired in 2010.

The U.S. senator from Arizona was the first female pilot to fly in a combat mission. She successfully sued the Department of Defense to lift policy requiring servicewomen to wear a body-covering when traveling in Saudi Arabia.

In March, she revealed a senior officer raped her while she served in the Air Force.

And Thursday, in front of representatives from 128 universities, superintendents of three service academies and secretaries of the Army and Navy, she called out the leadership structure of the United States military, whereby young officers are in charge of other service members of nearly the same age.

“Why are we putting 19-year-olds in charge of 18 year olds?” she questioned the audience.

McSally's pointed questions were part of her keynote speech at the annual National Discussion on Sexual Assault and Sexual Harassment at America's Colleges, Universities and Service Academies. The Naval Academy hosted the conference, which started Thursday and continues Friday.

McSally, appointed to replace U.S. Sen. John McCain after his death last year, was one of a number of speakers drawing attention to power imbalances and cultural factors that contribute to sexual assault at service academies.

Through keynote addresses, panel discussions and smaller breakout sessions, about 325 representatives of colleges and universities as well as sexual violence prevention advocates shared best practices, highlighted research and asked outstanding questions about the prevalence of sexual violence on campuses nationwide.

The conference comes two months after a Department of Defense report outlining the results of a biennial survey of service academy cadets and midshipmen.

At the Naval Academy, rates of reported sexual harassment are on the rise as well, with 56% of women and 17 percent of men reporting some instance of harassment or gender discrimination.

McSally first revealed her personal experience with sexual violence during a Senate Armed Services subcommittee hearing on sexual assault in the military. She said the rape is one of two unwanted sexual encounters she had during her time in the Air Force.

She urged military leaders Thursday to reexamine the learned cultures and leadership structures that might lead service members to perpetrate sexual violence against one another.

The military academies can be like a “pressure cooker,” she said, where cadets and midshipmen learn to “do what you're told.”

“But then we put 19-year-olds in charge of 18-year-olds, and the adults leave for the weekend and it's like 'Lord of the Flies,'” she said.

Within the Brigade of midshipmen and student populations at the other academies, upperclassmen lead their younger peers. Upon graduation, officers age 21 or 22 are often responsible for service members in their same age group.

Navy Secretary Richard Spencer, during a press conference, commended McSally on her “bold and insightful” speech, but said the leadership structure will remain.

“Nineteen-year-olds will overlook 18-year-olds because of the way we're inculcating leadership,” Spencer said. “That being said, there's a lot we can do to make sure that they have the tools they need to do this properly.”

Naval Academy Superintendent Vice Adm. Ted Carter, during the conference, highlighted some of the changes made to foster a safer environment for victims of sexual violence and encourage leadership that leads to prevention.

Midshipmen can sign up to be “guardian angels,” watching over their peers in free time off-campus when they might be drinking. They can also become peer-educators in the academy's “SHAPE” program, whereby midshipmen talk to their peers about bystander intervention, sexual assault prevention and effective leadership

As an institution, the academy expanded the chaplain corps, often the “first stop” for survivors of unwanted sexual advances, Carter said, and offers mental health services as well as victim/survivor advocates and legal counsel.

The academy also moved the office where victims of unwanted sexual contact could report from Bancroft Hall, the dormitory for the entire brigade, to Dalghren Hall.

“(It's) a very close location, but not as immediately visible,” he said, “and we saw an effective change in that.”